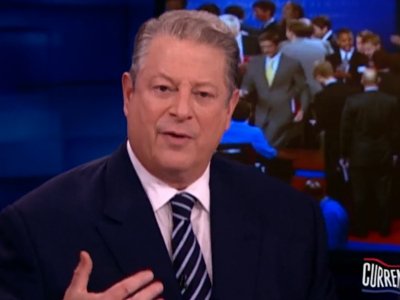 UPDATE:  All of this is probably moot this evening as CurrentTV has been sold to Al Jazeera for $500 million. They’re going to shut it down and start a new American based version of their own channel using CurrentTV as its foundation. Don’t know how my pal Joy Behar will fit into that– Al Jazeera is not a lot of laughs.

Al Gore’s Current TV cable channel–which I’ve never been able to find — is in danger of being dropped by Time Warner Cable. New York subscribers received a notice today that Current TV was one of many staples on the cable box — those channels where you’re not sure what’s going on and a few that are brand names–which aren’t financially feasible to carry anymore. Ovation, the arts channel, has already been dropped. Time Warner Cable is not owned anymore by Time Warner, they just have the name, and their service in the New York area has been a big problem ever since Hurricane Sandy.

Here’s the list of channels that could be gone very soon. I’m surprised about Starz, which carries decent original programming even thought they recently cancelled “Boss.” Not surprised about ShopNBC, where two guys hawk quartz watches in the middle of the night. And Lifetime! Not Lifetime! Also, the NHL isn’t even playing hockey. Who would be watching their channels right now? What are they showing? Ice? Melting?

“Time Warner Cable’s agreements with programmers and broadcasters to carry their services and stations routinely expire from time to time. We are usually able to obtain renewals or extensions of such agreements, but in order to comply with applicable regulations, we must inform you when an agreement is about to expire. The following agreements are due to expire soon, and we may be required to cease carriage of one or more of these services/stations in the near future: