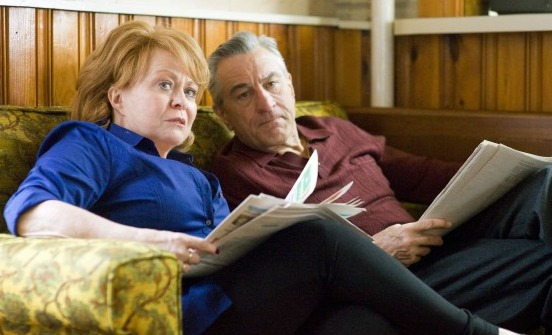 Believe it or not, it’s been two decades since Robert DeNiro was last nominated for an Academy Award. It was 1992, and the movie was “Cape Fear.” It was second nomination in a row– in 1991, it had also been Best Actor, for “Awakenings.” He lost both times. Prior to that, DeNiro had won in 1981 for “Raging Bull.” His other win was in 1975 for “The Godfather Part 2” as Best Supporting Actor.

DeNiro was also nominated for work in “The Deer Hunter” and “Taxi Driver,” his most imitated role. He lost both of those times.

Now after all this time, DeNiro could be up for a Best Supporting statue from “Silver Linings Playbook.” His role as Pat Senior, the understanding yet slightly eccentric father of Bradley Cooper, is a killer– without bullets. After a generation of doing comedies like “Meet the Parents” and “Analyze This,” DeNiro combines his best dramatic and comedic skills to pull off the role.

His scene with Jennifer Lawrence, a cinch for Best Actress, in the “Silver Linings” kitchen, is a total Oscar scene stealer. Lawrence, as Tiffany, roars in and confronts Pat Senior about where she was each time the Philadelphia Eagles have recently played.

Later, DeNiro delivers the movie’s most memorable line to Cooper: When life reaches out with a moment like this it’s a sin if you don’t reach back.” It’s a show stopper.

In Toronto, when DeNiro attended the premiere screening, he emerged with tears in his eyes. As Pat Senior, he holds this lovable yet dysfunctional family together. DeNiro not only supports Cooper and Lawrence, but plays brilliantly with co-stars Jacki Weaver and his real life pal, Paulie Herman.

DeNiro will heavy competition from other players in this category including Philip Seymour Hoffman from “The Master,” Tommy Lee Jones from “Lincoln,” Eddie Redmayne from “Les Miserables,” Alan Arkin in “Argo” and both Leonardo DiCaprio and Christoph Waltz (who’s really a lead) in “Django Unchained,” as well as dark horse Javier Bardem in “Skyfall.”

Voting for the Academy Awards online opens today for members.