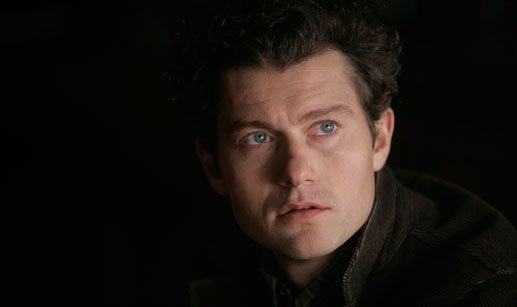 James Badge Dale is going to play Lee Harvey Oswald’s brother in a new film called “Parkland.” It’s set between the time JFK was killed by Oswald and Oswald was murdered by Jack Ruby in November 1963. Dale, the son of the late great star of “Nine” Anita Morris and choreographer Grover Dale, is hot as a pistol right now in “Flight” after starring in AMC’s “Rubicon.” Our PAULA SCHWARTZ caught  up with in New York:

James Badge Dale has seven minutes screen time tops in Robert Zemeckis’s “Flight.” He plays a dying cancer patient who bums a cigarette from Denzel Washington in a hospital stairwell and riffs on life, death, God, regrets. He’s spritzing words as fast as they materialize in his dying brain because he’s got maybe 24 to 48 hours of life left. The actor is so phenomenal that like me you were probably wondering, who is this guy? Turns out he’s been around a while, with parts in “Shame,” “The Grey” and the tv series “Rubicon,” but his role in “Flight” is something else, a game changer.

Dale was at a luncheon in honor of Zemeckis and screenwriter John Gatins at Circo restaurant in midtown. (They have a lot to celebrate; “Flight” is a big hit at the box office and has lots of Oscar talk.)

The handsome actor, who has red hair and a healthy build, is unrecognizable from the gaunt, sickly guy in the film. But looking healthy nearly cost him the part.

“I had to beg them to let me read that role,” said the 34-year-old actor. They also wanted someone younger. “They were going for early 20’s, and I understood that but I just fell in love with the role from the moment I read it.” He was persistent enough that they let him read the script and told him he could come back to read. Then they changed their mind.

“The morning of the reading we had this huge argument back and forth,” he said. “Just give me one take as the cancer patient,” he pleaded. After the reading, casting director Victoria Burrows told him, “Okay, now I get why you wanted to read that. Now I have to show this to Bob.”

Dale said he and Zemeckis talked for a long time. “I told Bob why I wanted to do this, that I have some very personal connections there and some reasons that I felt like I could understand what this is to the story.” The director gave him the part but told him to lose weight, “because you’re too healthy.” The already slender actor lost 20 pounds in six weeks.

I asked Dale about the personal connection he drew on for the role, and he told me that his mother died of cancer when he was 15 and that three to four days before her death, “there were moments when she became incredibly lucid and incredibly present even despite all the drugs and morphine and a lot of that was drawn from things that I witnessed.”

Dale’s mother was Anita Morris, the beautiful Tony-nominated actress who played Carla in the original production of “Nine,” and who died tragically at age 50 in 1994. (His father is dancer/actor Grover Dale.)

The actor is now on a roll with three big-budget action films coming out next summer. He plays “the dirty, older brother” of “The Lone Ranger” (Armie Hammer) in the Johnny Depp film. He’s also in Marc Forster’s “World War Z,” starring Brad Pitt, as a zombie ranger during a pandemic. Then there’s “Iron Man 3,” where he plays villain Eric Savin, who in the Marvel comic was a soldier who got fatally injured and then was resurrected.

“Ben Kingsley is the mouthpiece. Guy Pearce is the brain. I’m the muscle,” he said. Being in 200 million movies with CGI “is a weird departure” for him. “I’m more of a ‘put two guys in a room and we’ll just talk to each other’ style of actor. But I had a lot of fun. I learned to ride a horse. I got to beat up grown men in robot suits and shoot zombies with Brad Pitt.”