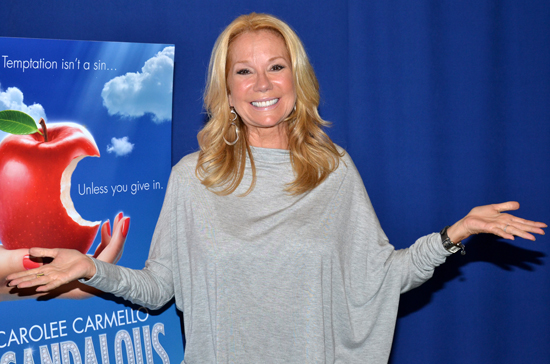 Kathie Lee Gifford worked for 12 years on “Scandalous,” her Broadway musical about feminist evangelist pill popper and trailblazer Aimee Semple McPherson. Joy Philbin was telling me that during the intermission last night of the show’s premiere. “She called us over and said, I’ve been working on this musical. Then she played us a two hour CD of the songs.” Regis Philbin, sitting on the aisle, nodded in assent. Kathie Lee had just left their morning talk show to be with her kids and write “Scandalous.” “You can’t believe her dedication to it,” Regis said.

And so “Scandalous” has opened to mixed to good reviews,  a solid B. if were were to grade it But it’s very entertaining. Stars Carolee Carmello, George Hearn and Roz Ryan lead a cast that is wildly talented. The set at the Neil Simon Theater is unusually intimate. While the songs are not as memorable as they could be, the overall effect is energizing. And those leads are amazing. Carolee Carmello is not to be missed Semple McPherson. Roz Ryan, gives the show a B12 shot of soul. It’s a welcome jolt.

Kathie Lee inspires loyalty. Not only were Regis and Joy there, but her whole “Today” family turned up including Matt Lauer, Savannah Guthrie, Natalie Morales, and Al Roker. Hoda Kotb, Kathie Lee’s hilarious and sexy co-host, was not only at the show but accepting congrats for her pal. Hoda’s “date” for the night was Liza Minnelli, in great form. I asked her how she liked that Living Landmark dinner last week. “It went on sooo long,” she said. “I was tired.” But for this show, she said: “Hoda called and I said, alright, Let’s go!” She punched the air.

Frank Gifford was all smiles. “This show is finally out of my house!” he said. “I’ll miss it.” You remember back in the day Kathie Lee drove us crazy with stories on the air about her kids, Cody and Cassidy. You’d think they’d grow up to be crazy showbiz kids. Indeed. they are the loveliest kids, so well spoken, so interesting, attractive, bright. I am not kidding. Just like the Philbin girls. What a pleasure to talk to them, like adults. They even have jobs. These kids will not be sitting around eating bon bons.

Meanwhile, Joan Hamburg of WOR was in the audience, along with Jimmy Nederlander Sr. and Jr. (the latter with wife Margo), the great–I mean great- Broadway star Lillias White, as well as theater’s very funny Jackie Hoffman, and even Meredith Vieira. Yes, Meredith who is not on “Today” anymore, came to support Kathie Lee. How cool is that?

So people give Kathie Lee a lot of grief. But she hung in there for 12 years, had a vision, and put this show on Broadway. Aimee Semple McPherson does not get a glossed over portrait either. She’s a complex character. She even faked her own death once. Carmello nails it, and sings like her life depends on it. The result is she can’t speak between performances right now. It’s one or the other. But you’ve got to hear her and all of them, right away, at the Neil Simon.

PS Roz Ryan is appearing at the 54 Below Club on November 25th, on a night off. I’d make my reservations now if I were you!