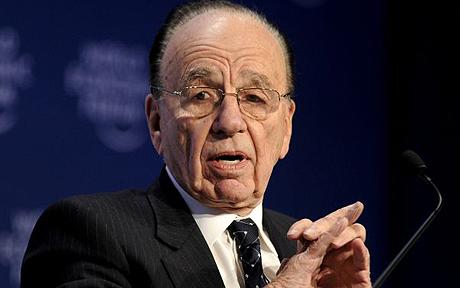 The usually voluble Rupert Murdoch was curiously restrained on Twitter yesterday. His one Tweet: “Everybody searching for any scrap of news about election tomorrow.plenty of straws to grasp for Romney, probably not enough”And today’s New York Post is very careful to congratulate Obama both in the lead story and in the editorial. All the bite and bile are gone. And while Fox News’s Karl Rove, aka Republican operative, was melting down on the network, that was something Murdoch couldn’t control.

But as I pointed out last week, it’s Murdoch’s National Geographic Channel that aired the pro-Obama “Seal Team Six” on Sunday night. And my experts abroad note that Murdoch’s British papers have been extremely warm to Obama. So what’s going on here? Sources say Murdoch is taking it easy with Obama because he’s afraid of investigations and anything negative here in the U.S. in the phone hacking scandal.

Murdoch is a savvy politician himself and knows how to read tea leaves. He could see some time ago that Romney was not going to win, and that staying on Obama’s good side would come in handy. Even three days ago he Tweeted: “Seems slight edge to Obama, but Romney seeing small late surge. Many state polls look unreliable.” But will it do any good? After the 2008 election, Fox News went wild in anti-Obama rhetoric. It will be interesting to see if Murdoch can tame that group and keep the inflammatory stuff to a minimum.

Check out today’s front page of Foxnews.com. The usual swagger and craziness have been replaced by stately analyses of the election. And even Foxnation.com, the subrosa website for the radically right wing, has been reined in and buttoned up significantly.