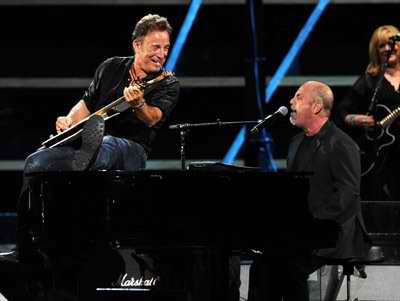 Bruce Springsteen and the E Street Band, Sting, and Jon Bon Jovi are set for a telethon that will be broadcast Friday night on NBC Universal stations. The trio, plus many other stars, will raise money for Hurricane Sandy survivors.

Of course, Billy Joel, Bon Jovi and Springsteen are local heroes and regularly pitch in for local causes. Sting is an honorary New Yorker who’s contributed $1 million to Central Park for new trees and has also worked for the Robin Hood Foundation.

Bon Jovi, by the way, has just rushed home to New York and New Jersey from Europe where he and his group were on a promotional tour. One member of the group, David Bryan–Tony winner for Broadway’s “Memphis”– I’ve heard has lost his home on the Jersey shore.

Springsteen and Billy Joel last performed together exactly four years ago at a historic concert for Barack Obama for President at the Hammerstein Ballroom.

Matt Lauer will host, and Brian Williams and Jimmy Fallon will participate. (Can the Roots be far behind?) Christina Aguilera will sing as well.

Could be there will be an appearance by Steven Tyler or Aerosmith. You never know: they’re already performing on the Today show plaza on Friday morning.

PS Bruce is ready for this telethon. He can sing his 1974 lament, “Sandy.”

More artists will be announced shortly…