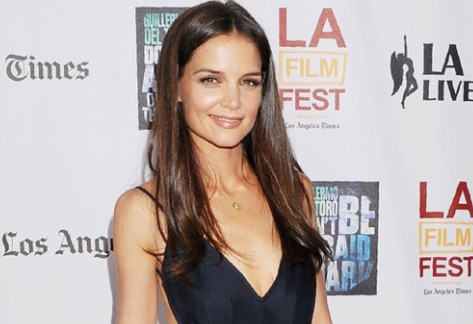 Jack (Norbert Leo Butz) returns home to Cincinnati under mysterious circumstances. His sister Lorna (Katie Holmes) is wondering where his wife (Judy Greer) is, why he doesn’t seem concerned about his job as a bank executive, and how he’s come across the large amounts of cash he’s throwing around. Lorna has moved back into her childhood home to help her very Catholic mother (Jayne Houdyshell) take care of the Lorna’s very ill father. She’s struggling with taking care of her aging parents, her brother’s odd behavior, his propensity to buy unhealthy amounts of Graeter’s ice cream, and an unrequited crush on Jack’s high school buddy Phil (Josh Hamilton). When Jack’s wife Jenny arrives in Cincinnati and drops a bomb, the family must decide what to do with a $27 million secret.

Earlier: Katie Holmes made a public appearance last night for the new Broadway play in which she will shortly open, called “Dead Accounts.” Katie, playwright Theresa Rebeck and director Jack O’Brien did a live radio show with an audience at the Greene Space for WNYC (NPR) in West Soho. The thing is, the event was so under-promoted that there were plenty of empty seats–and tickets were just $20. I actually bought two seats since the publicist for WNYC insisted that there was “no press” allowed in the studio. So kooky, these little publicists.

The lineup was esteemed WNYC interviewer Leonard Lopate interrogating the group which also comprised actors (Tony winner) Norbert Leo Butz. Josh Hamilton, Judy Greer, and Jayne Houdyshell. It is a great cast, and O’Brien has already directed Butz to two Tonys, so he knows what he’s doing. From what we could figure out — since no one there including Lopate has seen Rebeck’s play: it takes place in Cincinnati on one set– a kitchen–where a large Catholic family gathers. The father may have just died since Butz returns with his estranged wife (Greer). Holmes is his sister, who’s stayed to take care of the parents. Houdyshell, who has a resemblance to Rebeck, is the mother. As in Rebeck’s “Mauritius,” there’s a lot of talk of dividing up an estate and people fighting over $27 million.

When Katie’s limo pulled up in front of the studio, a crowd of paparazzi gathered faster than you could say “Suri.” As the car pulled away, the limo driver asked me, “Who is that? I don’t even know” about his just discharged passenger.

Katie wore what looked like a white linen dress, with black leggings and a black jacket that she eventually removed because the lights were hot. During the course of the hour long talk, Katie did not say a lot. But at least she said more than “Amazing” or “I’m in love,” which is all she said really between April 2005 and June 2012. She seemed genuinely interested in what was going on, spoke about her family, her desire to work in theater: “I thought it would be so challenging.”

Why she wanted to work in theater: “Because I was so young when I started working, I was always trying to catch up.” Butz said she has no trouble projecting her voice in the theater.

Katie: “Finally I get to yell!” She added: “What I really loved about this character was she’s strong underneath it all.  I like her values, I like that she’s trying to figure it all out and really cares for her family.”

What I really liked about Katie: she seems totally fascinated by the amazing Judy Greer, who will probably steal the play from everyone. Also, maybe someday someone will explain why Josh Hamilton hasn’t had a bigger career. He deserves it already but I don’t think he cares. He rode his own motorcycle to the studio.

You can watch the whole thing at http://tinyurl.com/btz8nbh