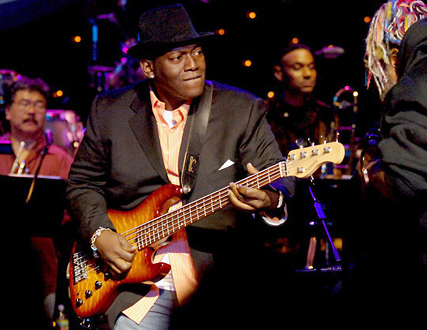 Randy Jackson slipped into New York last night to pick up a lifetime achievement award from the TJ Martell Foundation. This is the record industry’s highly esteemed charity for cancer and AIDS research. It was founded by Columbia Records’ Tony Martell over 30 years ago in memory of his son, TJ, who died thirty seven years ago at age 19. No parent has ever been so devoted to a child’s memory and to finding a cure for what took his life. Last night TJ Martell raised millions, with memorable performances by Graham Nash and David Crosby, BeBe Winans, Grace Potter, and Little Big Town.

The honorees included Randy, Russell Simmons, BMI chief Del Bryant, and producer/philanthropist Ed Walson, whose father pretty much invented cable TV in the Pittsburgh area. Tony Martell, who has snow white hair after all these years, also introduced the audience to several cancer survivors helped by the Foundation.

Randy is looking relaxed now that all the deals at “American Idol” are done. Mariah Carey and Nicki Minaj are on opposite coasts. Publicists are in their corners, dreaming up new schemes. Randy is working on Mariah’s album and some surprising new projects.

All the speeches were great, from Ed Walson reminiscing about saving up his money at age 10 to buy jazz records to Del Bryant recalling his famous songwriter parents, Boudleaux and Felice Bryant, who wrote the Everly Brothers’ hits like “Wake up Little Susie” and “Bye Bye Love.” There was much talk all night our departed friend, Frances Preston, who ran BMI years and was loved by all.

Randy Jackson was introduced with videos made by Ryan Seacrest and Mariah Carey. Ryan tried some lame jokes, but the audience didn’t bite.

Russell Simmons, who hasn’t seen a charity he didn’t like, talked about living a life of service.

Tony Martell, who is getting older now, still has incredible energy. He ended his remarks by asking the well heeled guests to make sure the organization lives on. There’s no doubt that it will.