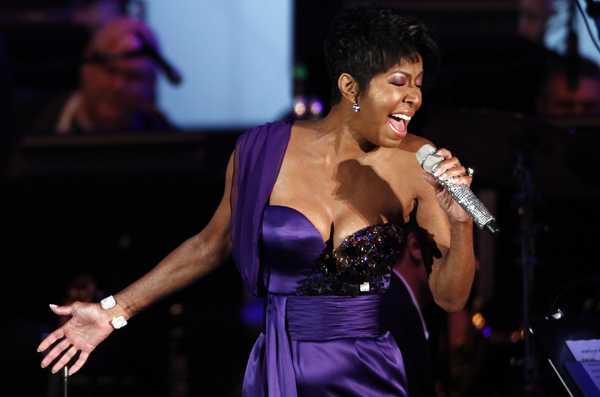 Yes, Denise Rich did revoke her American citizenship last spring, and left the United States. But she was back triumphantly Monday being very American– raising money for her Gabrielle’s Angel Foundation dinner.  The annual Angel Ball is named for her daughter who lost a battle with cancer in the 1990s. This year’s Angel Ball  was back at Cipriani downtown with a lot of celebrities, money people, actual stars, and a sort of ceaseless flow of tall, gorgeous, willowy models. In the end, Rich raised $3.7 million at the Angel Ball, a high water mark after a few difficult years in the recession.

So who was there? The current Angel Ball parties will never equal the first couple with Bill Clinton, Sarah Ferguson and Michael Jackson. Nothing will ever compare to the one in 1999 when 1,500 people arrived at the Sheraton Hotel’s massive ballroom with no computerized seating plan. People are still telling stories of Geraldo Rivera taking the stage and advising everyone to “Sit down wherever you are. You’ll make a new friend.” That’s how I wound up sitting with Goldie Hawn and Kurt Russell.

But this year was pretty good. Natalie Cole, Smokey Robinson and Nelly all performed, and all hung out at the dinner tables before and after their times on stage. Kanye West, looking spiffy in his tux, brought Kim Kardashian, daughter of O.J. Simpson’s late friend and attorney. (Apparently she’s on a reality show.) Nelly came with long time girlfriend Ashanti, the R&B singer, and her great mom, Tina. Also spotted: Nile Rodgers, Stephen Baldwin, and Jane Seymour and Stacy Keach.

Nelly also calls Tina “mom,”  which is sweet. He’s also had the diamond studded grill work removed from his teeth. “I bought myself some new teeth,” he told me, smiling wide and showing off a very nice pearly set of natural looking choppers. Good for him. Late rhe sang “Hot in Here,” and made everyone crazy on the dance floor. Nelly also begged Smokey to get a picture with him, which Ashanti’s mom took.

Clive Davis, the great grand pasha of the record business, commanded the Hollywood table: Joan Collins and husband Percy; George Hamilton and his girlfriend; Nikki Haskell, looking like a million bucks, and some personal friends. Clive says the Whitney Houston special on CBS, scheduled to air now on November 16th, is excellent and should not be missed.

Of course, Clive was more interested in hearing Natalie and Smokey, each of whom absolutely killed their short sets. Natalie, who’s about to record a music of Latin music, never looked or sounded better. She finished with an extended version of her signature hit, “This Will Be,” that was Latin flavored and full of soul. Smokey was off the charts– “Being with You,” “My Girl,” and a rendition of “The Tracks of My Tears” that almost brought the cavernous Cipriani space to total silence because the guests were so enthralled. Smokey told me he’s off to make an album in “Spanglish.”

And then there’s Denise, who sails through controversy like PT109 on a mission. There were some random protesters outside, shouting something. They were dispatched with very quickly. First Denise spoke, reminding the well-heeled guests that her mother, sister, and daughter all died of cancer. Star Jones conducted the early part of the auction. Bejeweled hands shot into the air. Men took out their leather billfolds. Someone pledged $250,000 right away. Ten people promised $25,000 apiece. “What do you get for that?” someone asked me. The answer: a tax deduction. No trips or tickets to games or donated paintings.

One speaker was not famous: the lovely and articulate Suleika Jouoad came to the podium. She’s 24 and has written about her very serious form of leukemia in the NY Times. http://well.blogs.nytimes.com/2012/09/27/a-cancer-patients-best-friend/ She looks like a young Sinead O’Connor with a pinch of Amy Adams. She’s not supposed to be alive. But she’s cancer free right now. And her story was so moving that I think people who would never have given much money dug deep down.