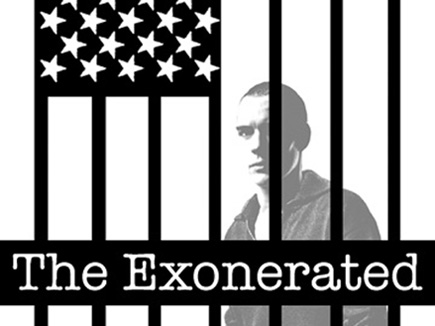 There are several stories that intertwine through “The Exonerated,” a play reading that took root ten years ago at the Culture Project on Bleecker Street. Now the people and their alarming sagas are back, revived by director Bob Balaban at the Culture Project with a new rotating cast of stars including — this past week– Joe Morton, Trudie Styler, and country-and-blues singer Steve Earle. And just to make things interesting, on Saturday night we heard Kerry Max Cook read his own story– as it’s written by Jessica Blank and Erik Jensen.

The stories in “The Exonerated” are all from death row, where these people went unjustly and were saved either by persistence, last minute admissions from the the real criminals, or DNA evidence. Each one of them is harrowing and shocking–that their lives were lost in some cases to 20 years of prison for crimes they did not commit. Most of them were in the south. If they make you think of the West Memphis Three, and how they were railroaded into life sentences (and are now released on a technicality) it makes you wonder about the justice system in parts of this country.

And listen: not all of them are black. Kerry Max Cook, and Sunny Jacobs–played so poignantly by Trudie Styler– were white and it still didn’t matter. This is why our friend Thomas Mesereau, who famously represented Michael Jackson, does so much pro bono work in Alabama defending the defenseless.

“The Exonerated” tells only a few of the many stories. When the play first opened ten years ago, 89 people had been exonerated due to the work of The Innocence Project. Since then 300 have had their lives changed. You can read Kerry’s and Sunny’s stories here:

Most of the people represented in “The Exonerated” were in the wrong place at the wrong time with the wrong people. Sunny Jacobs and her husband had two small children no money. In Florida they fell in with a bad guy who involved them in the shooting of two policemen. That man cut a deal but the couple went to prison. Sunny’s husband had one of the brutal executions in American history. He was later exonerated, as was Sunny, who now lives in Ireland. Styler takes a deep pause after she tells the audience, in Sunny’s voice, that the years 1976-1992 were completely obliterated. She spent five of them in solitary confinement. As Styler surveyed the audience for their reaction, the hairs on the back of my neck stood up. It’s chilling.

Kerry Cook is 56, married, with a 12 year old son. But he spent 1977-1997 in prison for a murder he didn’t commit. He was tortured and raped in prison. Now he speaks to prison groups, to anyone who will listen. He’s trying to get a visa so he can lecture at private schools in Pakistan. What the court system owes these people is incalculable.