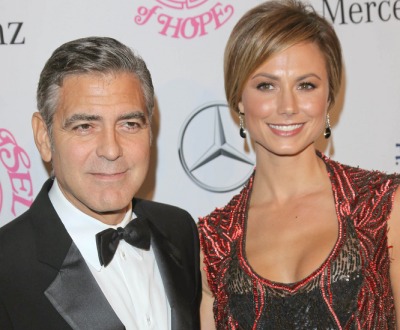 Now that Barbra Streisand has played Brooklyn’s Barclays Center, can Neil Diamond be far behind? Our LEAH SYDNEY chatted with Neil and hobnobbed with the AAA list last night in Hollywood at Barbara Davis‘s legendary Carousel Ball, sponsored by Mercedes Benz. Would Diamond like to play the Barclays? “I hope so.  If they ask me.  They haven’t asked me.” What Neil did do last night was make George Clooney, the evening’s honoree, sing for the first time in public. George warbled the hook from “Sweet Caroline,” which may not have been quite in tune, but was definitely in harmony with the night.

Clive Davis introduced Barbara Davis (no relation) to the crowd in the Beverly Hilton Ballroom as  the “inimitable belle of the ball with a purpose.” The event raised over $2.5 million  for the Barbara Davis Center for Childhood Diabetes in Aurora, Colorado, founded by her and her late husband film executive Marvin Davis.  Jay Leno was the Master of Ceremonies, who when he first got on stage cracked wise: “Hello one-percenters.”  Jay was followed by American Idol’s Jessica Sanchez, who dedicated “And I’m Telling You I’m Not Going,” to George Clooney.  Then Kenneth “Babyface” Edmonds introduced his song, “When Can I See You Again?” and also dedicated it to George, but then quipped, “nah, that’s’ too weird, I’m dedicating it to Stacy.”

Shirley Maclaine  introduced Clooney, who was honored with the Brass Ring Award for his humanitarian efforts. She went on to list his accomplishments including Sexiest Man Alive– George put up two fingers and mouthed “twice” as the camera cut to him. Clooney then went on to be playful then serious by talking about the situation in Sudan and in injustice all over the world by saying, “all of us are going to have to find lots of ways to make life miserable for people who make other lives miserable. “

Diamond finally appeared, and started to sing his hits to the A list bopping crowd.  When he got to George to sing ‘Sweet Caroline,’ George gamely did the “bah, bah, bah, ” part and though he protested on the “hands, touching hands” part,  he joined in for the chorus anyway, after he chugged a beer, cracking the crowd up.

Enjoying it all, one of our favorite people, Jackie Collins. She told Leah: “My new book, ‘The Power Trip’ comes out in February 4th, just in time for Valentine’s Day. It just came out in England where it’s # 1.  It’s about an exciting super yacht filled with famous people who get pirated by Somali pirates.  I’m in talks to make it into a movie, which is fabulous. Also my Lucky Santangelo cookbook comes out next year.  Who should play the hero in ‘Power Trip?  Oh the tall good looking one on ‘Hawaii Five –O,’ Alex O’Loughlin.”

PS Jane Fonda heads to Paris this week to do some promotions for L’Oreal. Her French film, “All Together,” just began a limited run in New York, and is awaiting more cities from Tribeca Films. This is like the French version of “Exotic Marigold Hotel”– tres charming. Hopefully, Tribeca will give it a push. You can also watch it on amazon.com Instant Video and iTunes for a limited time. Hurry. Tout suite!