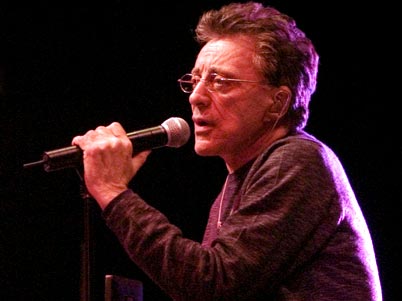 Frankie Valli is 78 years old. He’s also about five foot six I think on a good day. By the time “My Eyes Adored You” was a hit in 1974, it had been years since he’d had a new hit on the radio. A couple of generations had passed by since his last real hit, around 1967, with “Can’t Take My Eyes Off of You.” His career with the Four Seasons had started in 1962 and had really been confined to the 60s. After that, he was kind an oldies act. But then he had a resurrection, which brought two things– a hit for the Four Seasons without him (“Oh What a Night”) and Frankie’s theme song from “Grease,” written by the Bee Gees for the musical movie.

So why is Frankie Valli on Broadway? And selling out seven shows at the Broadway Theater, around the corner from “Jersey Boys,” the still red hot musical based on his life? It’s amazing. On stage he looks like he’s ten feet tall. I don’t know what he’s doing, but his unique falsetto from the Philly-Jersey line is mostly intact. Bob Gaudio’s songs never sounded better–he wrote the Four Seasons hits like “Rag Doll,” “Sherry,” and my personal favorite, “Walk Like a Man.”

Why do I even have a personal favorite? Frankie Valli was from before my time, and after it. But the songs have lasted and grown. Frankie has never sold out. He’s remained true to himself and to the music. His work ethic is legendary. He just keeps going. And like Tony Bennett, he’s made it through the fire. The audience adores him. Adores. They not only sing along with the songs, they sing them without him, before he starts them. “Oh What A Night,” on which he now sings part of the lead, got a standing ovation in the middle of the show.

Somehow Frankie keeps the show–which lasts two and a half hours including intermission–from being corny. No Vegas or Branford mishegos. It’s very straight ahead. The large band plays against a plain black backdrop. The lighting direction is very good, but not schmaltzy. There’s no disco ball. Frankie keeps it simple, and let’s the dozen or so hits punctuate two sets. He’s got a new album that includes songs suited for his voice and time: “Call Me,” “Spanish Harlem,” and “Stay” worked the best. He does occasionally remind the audience he’s got “400,000 copies” with him and they’re for sale.

His voice is almost indescribable. Always an exception, Valli was never a crooner. He sings falsetto, but it’s a higher pitch than his natural high-pitched tenor. No one else can do it. He’s lower the keys of the songs and they still sound high. Maybe gets a little help from his backup singers–four young Seasons. But in th end, it’s just him standing on the stage, very much alone, and he does it. His voice is sharp, and reminds you of papers being collated quickly on a copier or a bread slicer as it cuts through the air. It’s full of heartache and singing late nights on the street corner.

After the show tonight, the real Patsy’s from 56th St. around the corner catered a reception. Marrone! The guest were representative of the audience– of a certain age and ethnic background. It was like being in a group scene from “GoodFellas” or “Casino.” But in the absolutely nicest way. Frankie is tiny. Dr. Oz came to pay respects and towered over him. Cousin Brucie stopped by. Frank Vincent from “The Sopranos” and Scorsese films, was a guest. Somewhere Bob Gaudio and Gerry Polci–the original lead from “Oh What a Night”– were in the house.  Everyone went home with big grins on their faces.