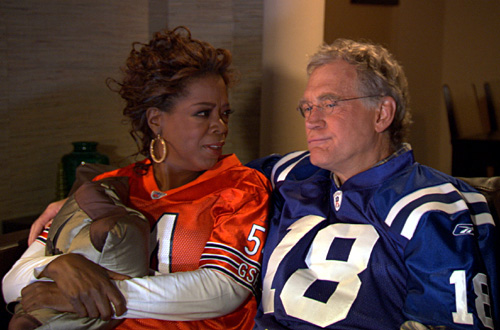 Remember there used to be a feud between David Letterman and Oprah? Now they’re going to meet and hug it out at Dave’s alma mater, Ball State University, in Indiana. on November 26th. If I knew where this was, I’d go there. (Just kidding!) This is bigger than any presidential debate. Dave has been a big contributor to Ball State, and has an ongoing lecture series there that raises money for the school. It’s funny: he can’t get Oprah on his show, but she’s coming to do this. That’s because, at heart, Oprah (like Rosie O’Donnell and Barbra Streisand) is a great fund-raiser and loves philanthropy. The stats: they’ve each appeared on the other’s show exactly once. Oprah came to Dave in 2005, he did Oprah when she was in NYC in 2007. I hope someone tapes this thing.

A Conversation with David Letterman and Oprah Winfrey

at Emens Auditorium on November 26

MUNCIE, Ind. — Distinguished Ball State alumnus David Letterman, host of CBS’s “Late Show,” will return to his alma mater on Monday, November 26, to host a conversation with media icon and philanthropist Oprah Winfrey at 4 p.m. in Emens Auditorium. The conversation is part of the David Letterman Distinguished Professional Lecture and Workshop Series, established in 2008.

Through the power of media, Oprah Winfrey has created an unparalleled connection with people around the world for more than 25 years. Her accomplishments as a global media leader and philanthropist have established her as one of the most respected and admired figures today.  As chairman and CEO, she’s guiding the development of her cable network, OWN.

“The Letterman lecture series is known for one-of-a-kind encounters with today’s most impressive leaders,” said President Jo Ann M. Gora. “Oprah Winfrey’s story is inspirational on many levels. She overcame a challenging childhood to become a global media leader. Equally impressive is her commitment to the power of education. She has awarded hundreds of grants to organizations that support the education and empowerment of women, children, and families around the world. The Oprah Winfrey Leadership Academy for Girls in South Africa is one example of how her philanthropy is developing the next generation of transformative leaders.

“We are grateful to Dave for his generous support of the university and his ongoing engagement and participation in the series. His direct participation has made this unique opportunity possible.”

Admission to the event in the 3,300-seat Emens Auditorium is free, but seating must be reserved. The university anticipates high demand for seats. Tickets must be secured in advance and will be available on a first come-first serve basis at the Emens Box Office. Tickets are limited to two per person. Students may begin picking up tickets at 9 a.m. on Wednesday, Nov. 7, with a Ball State ID. Ball State faculty and staff may begin picking up tickets at 9 a.m. on Thursday, Nov. 8, with a Ball State ID. Tickets will be made available to the general public beginning at 9 a.m. on Fri., Nov. 9 and will continue to be distributed as supplies last. For more information on tickets, call the Emens Box Office at 765-285-1539 or toll-free at 877-993-6367.