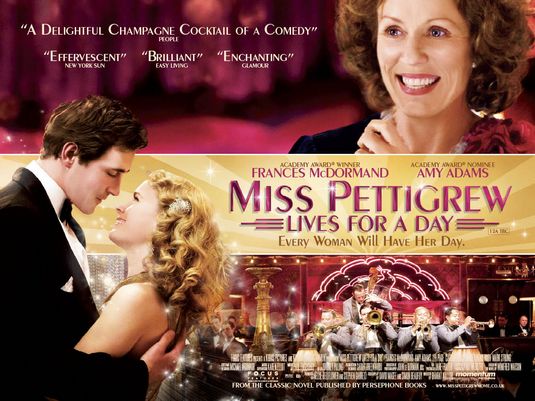 Exclusive: throw another film title into the Broadway mix. I’m told that Focus Features is dabbling in its first Broadway musical. They’re turning “Miss Pettigrew Lives for A Day” into a tune fest for the Great White Way. “Miss Pettigrew,” which didn’t totally work as a movie– it made $12 million– starred Frances McDormand and Amy Adams, and was directed by Bharat Nalluri (he’s since been sent back to series TV).

The stage version will be written and possibly directed by Robert Harling, of “Steel Magnolias” fame. Songs are being written by Lisa Lambert and Greg Morrison, the duo from the very witty  “The Drowsy Chaperone.” John Lyons, still with Focus after making several classy movies there, is said to be in charge of the production.

Will it work? Who knows? As long as everyone’s met the financial backers in the flesh (see the “Rebecca” scandal), and gotten cashier’s checks up front, “Miss Pettigrew” might live for more than a day this time!