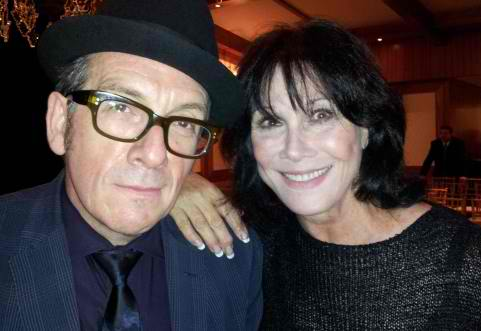 After this week’s earlier memorial tribute to Marvin Hamlisch, it didn’t seem like anything could top Barbra Streisand, Liza Minnelli and Aretha Franklin at Lincoln Center.

There were moving speeches from Jimmy Webb, Paul Williams, and famed film producer Walter Mirisch, who will be 91 in November.

In the audience, lots of Hollywood vets including Michele Lee, Sally Kellerman, and Monty Hall. Lots of people who didn’t know each other mixed and mingled. It turned out that Michele Lee, star of “Knots Landing” a Broadway musical comedy star, loves Elvis Costello’s music. Who knew?

Absent from the proceedings was Dionne Warwick, who’s been singing Hal David’s words since 1962. She was said to be performing for the Pope at the Vatican. Warwick sent a message saying “my spirit and heart are there.”

Bacharach, 84, is slight and a little frail, not quite the swinging Hollywood playboy who was married to Angie Dickinson and Carole Bayer Sager. But very much the Gershwin of his generation, Bacharach took to the stage and performed one of his songs with David, “Windows of the World.” He said, “Hal always liked the lyric on this song, but it wasn’t a hit. It was my fault. I screwed it up. The tempo was too fast and the drums are in the wrong place.” Bacharach, never a great singer of his own songs, was the most poignant of all the performers in the show.

Some highlights: Valerie Simpson turned “I Say A Little Prayer” into a soul convocation. Marilyn McCoo of the Fifth Dimension, still gorgeous, maybe the most underrated female singer of the pop-soul era, was spectacular on her old hit, “One Less Bell to Answer.” Jackie DeShannon closed the show with a singalong of her Bacharach-David hit, “What the World Needs Now is Love.”

But the standouts were Costello, who made a very charming album a few years ago with Bacharach. Early in his career he recorded “I Just Don’t Know What to Do with Myself,” reinventing Warwick’s minor hit into a slice of punk discomfort. Some 35 years later, he still understood it maybe better even than Warwick.

And Stevie Wonder, god bless him: he had a hit in the late 60s with “Alfie.” Now he added literally a virtuoso harmonica solo that brought the audience to its feet. Stevie talked about hearing “You’ll Neve Get to Heaven If You Break My Heart” for the first time on the radio when he was about 12.

Bacharach and David have so many hits, and there was only time for 8 of them, For Walk on By, Always Something There to Remind Me, Raindrops Keep Falling on My Head, and so on, go look on YouTube, Spotify etc.

Elvis gave me a good long explanation of the genius of Hal David later, at the intimate out door buffet hosted by Hal’s loving wife Eunice and their extended family. “People thought their songs were easy listening,” Costello observed. “But there’s no such thing. Listen to the words Hal wrote. If they were easy we wouldn’t be listening to them today, and discussing them.”

Indeed: many of the speakers quoted “A House is Not a Home,” a song of tremendous insight. Marilyn McCoo, who had hits with the Fifth Dimension by Laura Nyro and other famous songwriters, called “One Less Bell” her favorite of all time.

Best line of the night came from Eunice David, a beloved figure in town, who recalled Hal’s proposal. “He said, I live in hotels and eat all my meals in restaurants,” Eunice said. “I knew immediately he was the guy for me.”