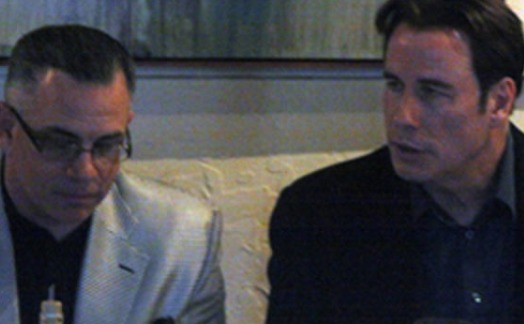 Exclusive: It’s been about two years since the John Travolta “Gotti” movie fell apart. It was supposed to start in 2010, then again in 2011. It was at the Cannes Film Festival in May 2010 that director Barry Levinson and screenwriter James Toback showed up with producer Marc Fiore. They’d replaced Nick Cassavetes, and were all set to get new financing. Levinson was bringing Al Pacino to the film. Lindsay Lohan was still out there somewhere.

But then I reported this story, that Marc Fiore was actually Marco Fiore, who’d done a lot of time at Allenwood Prison for fraud (not a vacation, as New York Magazine suggests today) and had been the main defendant in the prosecution of a Boiler Room scheme. A book was even written about it in 2003, which no one who’d signed on to “Gotti” had read. Here’s my original story: http://www.showbiz411.com/2011/09/22/gotti-movie-one-year-since-it-was-announced-the-producers-mob-ties-are-real

The movie was not going to happen. Fiore responded by upping Toback to executive producer without telling him. He also announced another exec producer, a man named Salvatore Carpanzano. I then wrote a story revealing that Carpanzano had also done a stretch at Allenwood. Even for a Hollywood film, this was getting unusual. It was like “Get Shorty,” a Travolta movie about a gangster who wanted to make a movie.

I met with Carpanzano last October and he laid out his issues with Fiore. It was the first and only time he’d spoken with a reporter. By then, a casting sheet had gone for 80 roles in “Gotti,” and was then rescinded. Here’s my story with Carpanzano: http://www.showbiz411.com/2011/10/17/gotti-movie-exec-producer-ive-never-encountered-anything-so-difficult-in-my-life

Carpanzano and Fiore then had a falling out. Not such a good plan for Fiore, who then drafted Marshall Field department store heir and Interscope Records founder Ted Field into the operation. Carpanzano told me that Fiore now owed him a bunch of money in interest after tying up his backers’ funds (Carpanzano claimed to have a heavy investor in Dubai). http://www.showbiz411.com/2011/12/08/gotti-movie-ted-field-close-to-deal-with-summit

“Gotti,” of course, has never been made. Travolta has since had a series of major scandals that put his whole career in jeopardy. Field had lawsuits over his own company. Carpanzano got into a huge legal entanglement with an entertainment law firm, resulting in the exit from the firm of one the lawyers. In our story, Carpanzano insisted that he had $250 million to fund movies, and would do it without Fiore. Reading this, a real Hollywood indie company contacted Carpanzano and almost made a deal with him.

Barry Levinson’s moved onto other projects in TV and with “The Bay,” and his Phil Spector movie for HBO with Pacino. Pacino is also going to play Joe Paterno, maybe, in a film about the Penn State-Sandusky scandal. Travolta is sidelined by lawsuits and tabloid stories of his sex life. Lindsay Lohan — well, she’s her own continuing soap opera.

Was the “Gotti” movie ever a good idea? Not really. “The Godfather” was fiction. “Goodfellas” had a remote reality, as does a new mob movie called “The Iceman,” which is excellent. But “Gotti” is about real people. There are no heroes, particularly not John Gotti, Jr. He’s no Michael Corleone, pulled into the business against his will. The Gottis’ victims are everywhere, haunting the movie.

But is there more to this story? You bet. Stay tuned. I do wonder why today’s New York magazine story, a year late, omits almost everything of interest in the background of this story including our reporting, the Carpanzano episodes, and the fact that as of last night, absolutely nothing has happened to advance the movie, that it’s still not happening, or ever going to happen. It’s as dead as a horse’s head in a bed.