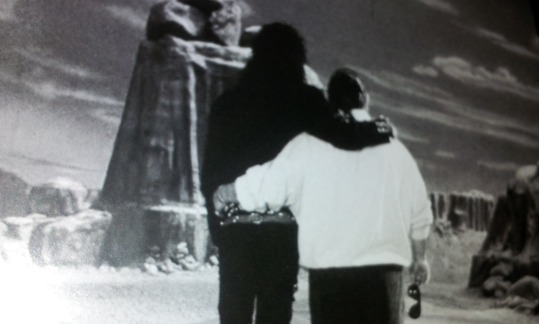 Michael Jackson’s “Bad25” boxed set is one of the best packages I’ve ever seen. Beautifully executed in a CD sized box (and not all the unnecessary packaging that often comes with these things), “Bad25” has four discs, two four color booklets, a poster, and stick on decal of the “Bad” cover if you want to add it to the package. The box itself is simple and elegant. Executors John Branca and John McClain dedicate the box to Katherine Jackson and Michael’s three kids. And on the back page of the main booklet, there’s a beautiful dedication to Michael’s late manager, Frank Dileo.

There’s a full page picture of Michael and Frank, with this inscription: “We would like to this opportunity to acknowledge the passing of Michael’s friend, Frank Dileo, who, as Michael’s then manager, played such an integral role in the BAD album and subsequent tour. As we listened to the music, looked through photos and watched videos, while working on this album and the documentary by Spike Lee to celebrate this era in Michael’s career, Frank was always in our thoughts. We miss his friendship, humor and spirit.”

Everything about “Bad25” is well done, perfect. The demos are a treasure trove. The live album from Wembley Stadium is a collector’s item. The remastered “Bad” shows Michael at his peak performance. Ironically, this is from before everything “Bad” happened. It goes on sale next Tuesday, the 18th. Don’t download it. You want the box.