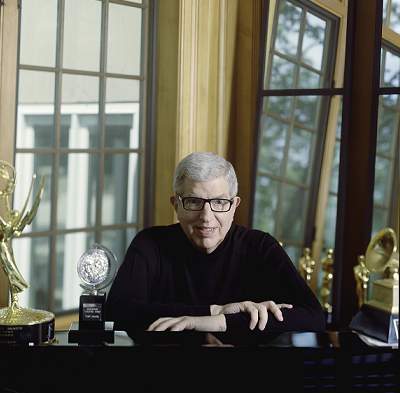 Marvin Hamlisch’s funeral at Temple Emanuel on Fifth Avenue was packed, and I mean jammed. Every seat was taken, people were standing. Candice Bergen. Tony Roberts, Tony Danza, Maria Cooper Janis (daughter of Gary Cooper), soap star Ilene Kristen, Kelly Bishop and Priscilla Lopez of the original “A Chorus Line” sat behind me. Liza Minnelli–who sat through all four “visitations” with Marvin’s family–was in the front row. She came with pal Billy Stritch.

Actor Lawrence Luckinbill sat with daughter Kate while her mother and his wife, Lucie Arnaz, sang and mingled with the 300 strong chorus that lined each side of the auditorium. Bill Clinton spoke, so did Leonard Lauder, Sir Howard Stringer, and a few close friends. The most moving part of the service: a speech by Terre, Marvin’s wife. She started strong, but was struggling not to break down at the end.

Exclusive: No one knows for sure exactly what happened to Hamlisch except this: he had had a kidney transplant. According to sources, he’d been ill for two years. He was working, and with his best friend, staying at a hotel in Los Angeles, on a project. The Hamlisches had actually quietly moved to Bedford, New York in the last couple of years, since he’d become ill. The friend heard a terrifying thud from the bathroom. Marvin had keeled over. He was hospitalized but really he was tragically gone. Friends surmise he had had cancer. On stage recently with Lucie Arnaz and Robert Klein, Hamlisch was described as “frail.” What a shame. Terre said he that this week there would have been an announcement that Marvin was taking over the Philadelphia Pops Orchestra.

More stars: Alan Alda. Regis and Joy Philbin came with Kathie Lee and Frank Gifford. Chris Matthews. Idina Menzel sang “At the Ballet” from “A Chorus Line.” It was terribly moving; she was like buttah. The chorus opened the funeral with a beautifully arranged version of “The Way We Were” and ended the service with “What I Did For Love.” There wasn’t a dry eye in the house.

The organ player on stage played lots of Marvin’s hits at the start and end of the funeral. It was the only chance to hear an instrumental version of “Nobody Does It Better” on an organ in a synagogue.

MIA: Barbra Streisand, the Bergmans, Carole Bayer Sager, Carly Simon–due to travel schedules, etc. There should be real memorial services in New York and L.A. Also, Marvin’s mahogany casket was covered with golden Freesia. Very elegant. Some of the flowers sent by the well meaning –lots and lots of huge arrangements, which are not part of any Jewish custom–were given away. Quincy Jones was one of the many who sent, and sent big.

After the funeral, Alan Alda and Richard Gere at separate tables at an Italian bistro on Madison Avenue. Gere brought his whole team from his Foundation. Turns out Marvin had been a heavy supporter of the Dalai Lama. Who knew?