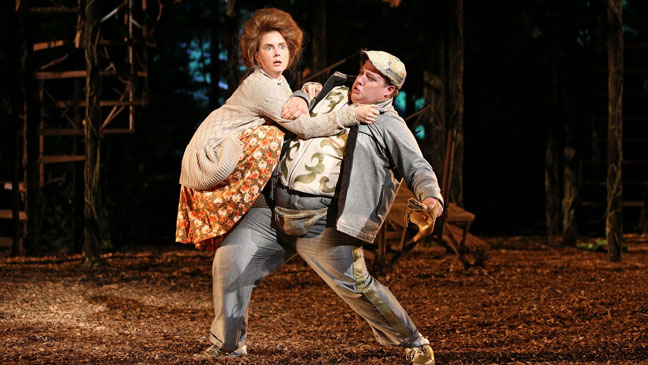 Despite today’s completely wrongheaded New York Times review of “Into the Woods,” the Sondheim musical production by Shakespeare in the Park is organic, endearing, looney fun. I loved it. So did everyone else at last night’s grand premiere, and they weren’t relatives of the cast. I did run into Mort Zuckerman (on a date), Chris Sarandon and Joanna Gleason, John Patrick Shanley, Camryn Manheim,  “Venus in Fur” director Walter Bobbie, actors Jay O. Sanders and Marianne Plunkett, and lots of other interesting types. But the evening was about “Into the Woods,” the musical that followed “Sweeney Todd” on Broadway in the Sondheim canon. I was at opening night in 1987. (I was six at the time!) This version eclipsed that one. It’s a totally enjoyable hit.

Movie star Amy Adams, who was so good in the movie “Enchanted,” makes her New York-not Broadway debut as the Baker’s Wife opposite the remarkable Denis O’Hare as the Baker. They are wonderful. Adams sings like a bird and is fun on stage. She’s eminently watchable and gets the Baker’s Wife dilemma in the second act, when all the fairy tales go sour and the characters have to face life’s issues. Adams is ready to headline a Broadway musical. She told me: “It’s Stephen Sondheim and it’s hard.” We agreed: there are a lot of words in those songs.

Among the other great pleasures of “Into the Woods”: Donna Murphy as the Witch, the aforementioned Denis O’Hare, Jessie Mueller as Cinderella (gorgeous voice) and Chip Zien as the mysterious stranger. (He was in the original production 25 years ago, and is better than ever.) The set has a nice organic feel as it is outside, and you never notice the running time of over three hours. There is nothing better than listening to Donna Murphy. I could do it all day. Ivan Hernandez is a charming prince Charming. There’s also much to be said for Rachel Canning’s puppetry and the sinister Giant–made up of umbrellas and voiced by Glenn Close.

See “Into the Woods”–don’t miss it!