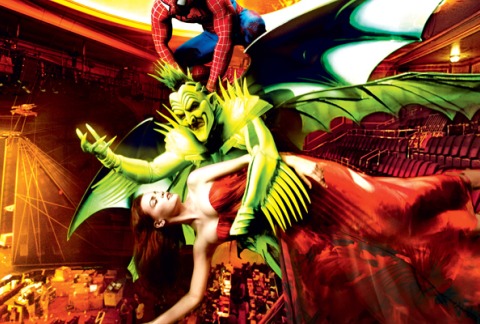 Patrick Page, the Tony nominated actor who stole “Spider Man: Turn off the Dark,” is leaving the show. He’s been with it for almost two years and was never injured–that we know of. Page stole every performance, and was the real star of “Spider Man.” His role was actually increased in size when the show retooled in the spring of 2011. Alas, the Green Goblin aka Norman Osbourne, has had enough of tinkling the giant piano keys on stage while aerialists all around him flew by. His last show is this weekend, and he’ll be replaced by Robert Cuccioli of “Jekyll and Hyde” fame. Patrick Page is married to TV’s Page Davis, by the way, making her Page Page. She and Lauren Lauren (originally Bush) should start a club!

Anyway, reports from London are that “Spider Man” cannot find a home there. No exiting theater is suitable. They’re not big enough. They’d either have to build a theater or put on the show in the O2 Arena. This may be a problem everywhere. And if theaters are hard to find, “Spider Man” will face financial trouble. Its whole model is about bringing it to other cities. Of course, the producers will have to pay creator Julie Taymor royalties if they do set up shop elsewhere. It was decided in arbitration that she wrote the show. She’s still suing over her copyright, however.