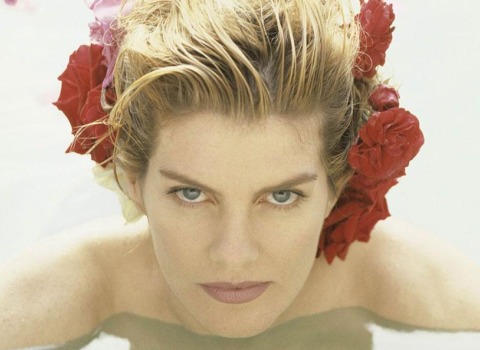 Rene Russo was the queen of the big budget movie. Think of it. Her costars were Al Pacino, Dustin Hoffman, Clint Eastwood, Kevin Costner, Pierce Brosnan, Mel Gibson, John Travolta, and so on. For years and years she was “the girl” they called in to play the wife, the girlfriend, etc. Last year, though, she shot a role in “Thor” and got mostly cut out of it. “Anthony Hopkins and I were each cut out,” she told me proudly last night. Might as well be on the cutting room floor with the best.

So now Russo, who took a little time off to get her daughter to age 18, is coming back. This winter she’ll shoot the feature film version of “Frank and Cindy.” It’s an indie movie by a first time director, G.J. Echternkamp. It’s based on his 2007 documentary about his mother and stepfather. Cindy is the wife of Frank, a ne’er do well real life rocker who had one minor single hit in 1983. It could be another “American Splendor.” Cindy, Russo points out, is missing 17 teeth. Do I hear Sundance? Oscar?

“I just couldn’t do any more of those other roles,” Rene told me. We know what she means. “I didn’t care anymore.” Good for her. Her husband, Dan Gilroy, co-wrote “The Bourne Legacy” with his director brother Tony. All the Gilroys were there last night for the premiere. Renee was just a member of the family. But really, she’s a movie star. “Frank and Cindy”– something to look forward to.

By the way, Frank’s hit was called “Whirly Girl.” The group was called OXO. I have zero memory of it, and I was only in my 20s and paying full attention to the radio then. But here’s the video. Maybe someone remembers it. http://www.youtube.com/watch?v=xaglwlgd97Q