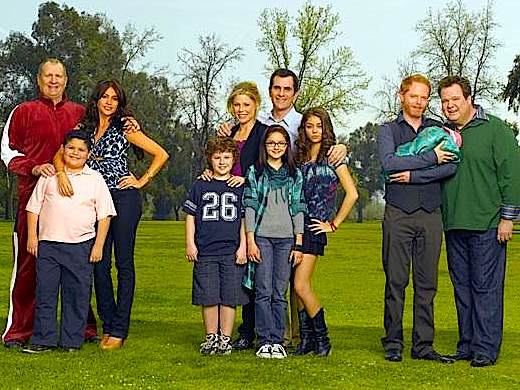 The cast of “Modern Family” didn’t show up on Tuesday for the table reading of the script for the first episode of the new season. They’re suing 20th Century Fox TV instead, invoking the “seven year law” that binds them to Fox and ABC exclusively and limits their pay. All of them are Emmy nominees–Sofia Vergara, Jesse Tyler Ferguson, Eric Stonestreet, Julie Bowen and Ty Burrell. Not included in the suit, but apparently in sympathy, is the other cast member, Ed O’Neill. The lawsuit is about money, of course.

The actors want significant raises so that when the show is over, and they’re typecast or work is harder to find, they’re in good shape. Similar situations have happened with shows like “Friends” and “Mad About You” where the actors negotiated together and wound up winning large sums. But the “Modern Family” cast is invoking an unusual law that prevents a company from tying up a performer for more than seven years. For some reason, all of their contracts do just that.

“Modern Family” is ABC’s jewel in the crown right now, with lots of prestige and awards. I’m surprised they let this go so far and become so public.