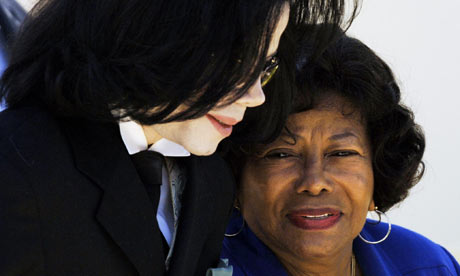 Since the middle of the night, Paris Jackson, whip-smart 14 year old, has been Tweeting that her grandmother and guardian, Katherine Jackson, is not home. Paris says she has not spoken to her grandmother in a week. Mrs, Jackson is the legal guardian of three minor children including Paris–her brothers Prince, 15, and Blanket, 10. If she has not been home for a week in Calabasas, California, then who is taking care of these children?

Jermaine Jackson has Tweeted that his mother is getting rest in Arizona, and nothing is wrong. But something is very very wrong if a 14 year old girl has to resort to Twitter to alert the world that her beloved grandmother and guardian is AwoL. The Jackson kids have lawyers and a court appointed guardian, as well. Plus, the Jackson estate should be concerned that one of their heirs is unaccounted for.

What makes all of this so suspicious is that it comes at the end of several days of infighting among the Jacksons. For years Michael Jackson used to give his mother chunks of money which she disbursed to his siblings who needed it. But since Michael died, the money is controlled by the executors of his estate. The executors must account for this money to the probate court. The gravy train for the Jackson family ended on June 25m 2009 when Michael died. Now they scramble to earn a living. There is grave concern that the siblings are pressuring Mrs. Jackson to turn against the executors, or gain conservatorship over her.

Michael’s children are not stupid. They can read the internet. By now they know that uncles Jermaine and Randy are not so interested in them. They are interested in their own futures. But I doubt scaring Paris Jackson and mobilizing her to this point will ingratiate the brothers with Michael’s kids. Let’s hope Katherine Jackson is returned to her home pronto, and that the lawyers and others representing the kids can prevent this from happening again.