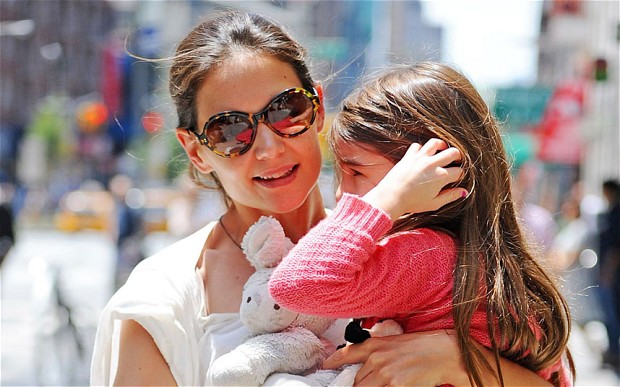 When Katie Holmes ran off with Tom Cruise in the spring of 2005, she was never alone. Always by her side was a Scientology monitor. Now she’s never out of sight, but by different minders–her parents. Her mom, Kathleen, re-surfaced today in photos. She’s in lock step with Katie wherever she trods. This time, the minder is approved. Kathleen Holmes and another woman–maybe a relative– are all over photos taken back in March of Katie in New York. There’s a whole sequence of them.

Indeed, the last time Katie and Tom Cruise appeared together (prior to her fake Iceland visits in June) was at the Vanity Fair Oscar party on February 26th. After that, Cruise seems to have been feeling bold enough to leave Katie to her own devices in New York. The good money is on that time period–late March–that the Holmeses were alone with Katie and Suri for the first time in a long time.

The planning that was involved–deprogramming her, finding the right lawyers, getting the new apartment, etc–would have taken at least April and May to sort out and put into action. Again, well played on the part of Kathleen and Martin Holmes, who must have been waiting the last 7 years for an opportunity. Kathleen Holmes’s hair isn’t white for nothing.

And what of Tom Cruise? He’s not seen in photos after the Oscars until the premieres begin in June for “Rock of Ages.” Katie is not with him at any of them– a first. Her last premiere with Cruise was “Mission Impossible 4.” For Cruise, the situation becomes more dire when he appears at the completely uncomfortable bust of a Friars Club dinner, bringing Suri as his date. Katie, he said, was in China. (She was– there are pictures.) But when she returns that very night, the two go their separate ways. Did Cruise know the end was near? Possibly. But instead of fighting it, he went to Iceland. And there’s been a chill in the air ever since.