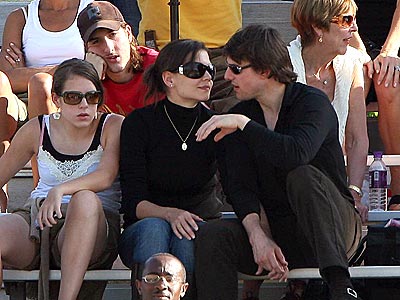 It seems like most of the media has turned the Katie Holmes-Tom Cruise story into one of Scientology being the cause of the divorce, particularly as the cult–as it now called by Rupert Murdoch–affects six year old Suri. But if Cruise insists publicly that Suri be raised as Scientologist, and Katie objects, the group’s leader David Miscavige may tell Cruise to let it go. Why? Holmes, more than anyone, could shine a glaring light on the inner workings of the sect. Once the divorce really gets going, and affidavits are filed, depositions are taken, things could get nasty for the secretive group.

For one thing, Holmes could finally describe what happened when she met Cruise in April 2005, where she was for an unexplained 16 days before surfacing in Rome with him and announcing she was in love. That was on April 27, 2005. Prior to approximately April 12th, Holmes didn’t know Cruise. Her reps sent her to L.A. for a meeting with him about “Mission Impossible 3” that may have taken place at the Scientology Centre in Hollywood.

From then on, Holmes cut off her family and friends. When she finally spoke, she was– as I reported then exclusively–monitored closely by Scientologist Jessica Feshbach Rodriguez, whose family are heavy Scientology donors. Feshbach even spoke for Holmes during a magazine interview that summer. For most of the time until they married in November 2006, Holmes was never alone without someone from Scientology. But all of her prior friends–including actress Rebecca Gayheart, and her ex castmates from “Dawson’s Creek”–were banished.

Inside the world of Tom Cruise, Holmes presumably saw everything there is to know about Scientology. One movie director told me in 2006 how Cruise’s Beverly Hills house–in which his sister, her three children, and Cruise’s mother all lived–was filled with people working through the night on various Scientology projects. “At midnight,” the director said, ” the house was lit up.”

Holmes would also have vital information about Cruise’s two older children, Connor and Isabella, and how they were raised apart from their mother, Nicole Kidman. Years ago, there was a public outcry when Bella Cruise’s name turned up on a list of Scientology “completions” when she was very young. It was obvious she was being indoctrinated. The children were home schooled by Cruise’s sisters, who joined the group, as well as his mother, who left her husband and her life in Marco Island, Florida when Suri was born, at Cruise’s demand, to come watch his new wife and daughter.

Cruise and his lawyers will have to decide if the gamble is worth it–that anything could come out, that all of it could impact Cruise’s career, and is it worth it. It’s probably not. As it is, former Scientologists have written books, and several high profile members have left or openly criticized the group including Lisa Marie Presley, director Paul Haggis, and actor Jason Beghe.