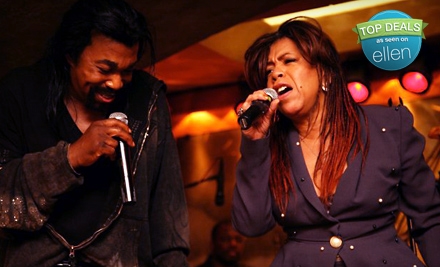 Valerie Simpson gets a minute and thirty five seconds Sunday to remember her husband on the BET Awards. She’ll sing and play piano on their hit, “Ain’t Nothing Like the Real Thing” at the BET Awards. Apparently there will be short tributes to Donna Summer and Whitney Houston as well. Simpson was still at her Sugar Bar restaurant at 1am on Friday morning, even though she had a 9:30am flight to Los Angeles. At the Sugar Bar she’s been dealing with her grief by carrying on her vision with Nick, the Thursday night open mic, where strangers and regulars get up and sing, sing, sing. The most recent winner of “The Voice.” Jermaine Paul, started out at the Sugar Bar.

Last night, Simpson and pal Felicia Collins, of the David Letterman band, went to the Apollo to see the Jacksons– Marlon, Tito, Jackie and Jermaine–do their reunion show. They loved it. Collins told me she hit it off with Tito. “Man he can play that guitar.” Then they headed to West 72nd St. and the narrow, talent-filled Sugar Bar. Both of Ashford and Simpson’s daughters were hanging out there, as was A&S’s  trusty long time aide Tee Austin. The place was packed; there were three birthday parties going on.

Various performers came and went from the stage, including regulars who wowed the crowd. The strangers had some pleasant surprises, too including a young white guy from London who sang like an R&B star. Another white guy named Shane who looked like he was out of the James Taylor Singer Songwriter catalog of 1972 took out his guitar and serenaded the audience with a very cozy pop tune. Every one is welcome at the Sugar Bar, which does tend to be heavy on the R&B, soul, jazz, funk. There’s a lot of Stevie Wonder, Michael Jackson, and of course, Ashford and Simpson.

An eighteen year old black kid was waiting for his chance to sing. He sat up front. He didn’t really know why Valerie Simpson was famous. Felicia Collins tried to explain it to him. She and Nick Ashford wrote dozens of classic songs, and Motown’s many hits like “Ain’t No Mountain High Enough.” His name was Usen, he said he was Nigerian. “Does anyone know Fantasia’s “I Believe” on the piano?” he asked from the stage. No one did, so he belted it out a cappella and got a standing ovation. A few voice lessons, some training, and Usen will be off to LA for one of the singing competitions. By then, maybe, he’ll know who Ashford and Simpson are.

Meantime, Valerie pointed out one of the last performers of the night–another winner, named China. “She’s our bartender,” Valerie said, beaming.  Then the whole gang sang a rocking R&B version of “We Can Work it Out”–and Valerie Simpson headed home to pack for the plane.

PS Also to be honored Sunday (The BET Awards air on July 3rd) is one of my favorite people, Vy Higginsen. Vy, sister of R&B llegend Doris Troy (“Just One Look”) is a legend herself–as a writer of the musical play “Mama I Want to Sing” and the creator of the Mama Foundation in Harlem. Vy is a dynamo. She’s getting the special Shine a Light Award. It’s her record label that just released Cissy Houston’s new four song gospel EP, too. Bravo, Vy!

Some of the Sugar Bar will be seen soon on Oprah’s OWN show. She just filmed a bunch of segments with Valerie and her girls.