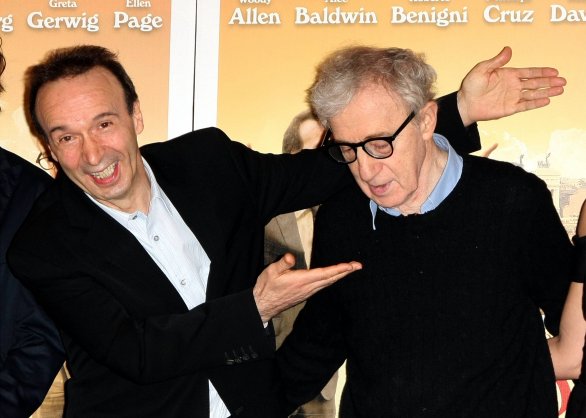 The Weinstein Company announced a new round of financing today–$225 million. Here’s the announcement: “A $150 million domestic-focused revolving facility was closed and agented by Union Bank’s Bryan LaCour, Tony Beaudoin and Alex Cho. Also key to a successful closing were joint lead arrangers and joint book runners from CIT, Wade Layton and Kevin Khanna, and UBS Investment Bank. Union Bank will serve as Collateral Administrator for this facility. An additional $75 million revolving new media facility was structured and agented by UBS Investment Bank. OneWest Bank will serve as Collateral Administrator for this UBS Facility, led by Joe Woolf.”

At the same time, TWC gets a little fun zetz in the new Woody Allen movie, “To Rome with Love.” Roberto Benigni, who won an Oscar for Best Actor in a Miramax (ex-TWC) classic “Life Is Beautiful,” is coming out of a Rome movie theater with friends. Whatever movie they’ve just seen is unclear, but Roberto announces, “It was better than The King’s Speech!” He then goes on to describe, vaguely, “Life is Beautiful.” Of course, Woody Allen has released a number of movies with Miramax and Weinstein including two big hits, “Bullets Over Broadway” and “Vicki Cristina Barcelona.” Very funny, “inside baseball” stuff–and nice that TWC is powered up financially for a big Oscar season. They’ve got “The Master,” “Django Unchained,” and a few others.