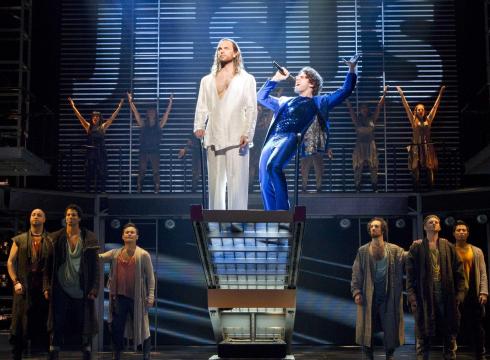 God is not having a good run on Broadway. It’s just been announced that within weeks of each of other, the three Broadway musicals with religious themes are shutting down for lack of business. “Jesus Christ Superstar,” “Godspell,” and “Sister Act,” will be gone by the end of the summer. “Jesus Christ Superstar”–which is really a terrific production–will be gone by July 1st if business doesn’t pick up. “Godspell” has to close. Not a great production in the first place, it’s barely staying alive with very low ticket sales. It will close on Sunday after hanging on–shall I say it?– day by day by day. “Sister Act,” based on the Whoopi Goldberg movie, says it’s closing on August 26th when its current star Raven-Symone, is scheduled to leave. It’s a weird coincidence, to say the least. Meanwhile, the most god-less musical of all time, “The Book of Mormon,” is packing them in like never before. On a personal note, I loved this production of “Jesus Christ Superstar.” If they really do have to close, then try and get over there and see it. Josh Young is outstanding as Judas and the whole cast is terrific.