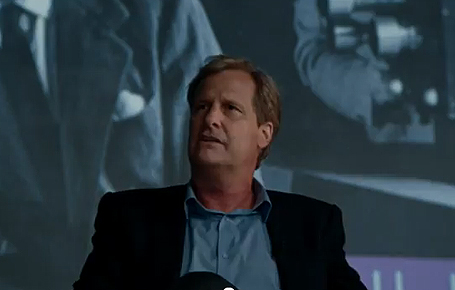 There was a time when HBO could be counted on for two things: gratuitous nudity and foul language. Think of Samantha in “Sex and the City” or the girls at the Bada Bing in “The Sopranos.” On Sunday, the cable network which can do whatever it wants–it’s cable–will debut Aaron Sorkin’s “The Newsroom.” Someone may say ‘shit’ but I don’t recall it. And Sorkin himself says there is no nudity, no sex. The show follows “True Blood” on Sundays, a show which has plenty of sex for everyone. But the main thing about “The Newsroom,” which we saw tonight with a media-heavy audience, is that it’s the kind of well written, acted, directed, produced show NBC used to put on at 10pm on Thursdays.

Indeed, “The Newsroom” is the updated version of “Lou Grant” meets “Broadcast News.” Jeff Daniels stars as the host of an 8pm cable news show; both he and the show have become tired. Sam Waterston — awakened from 50 years on “Law & Order”–is his boss, head of the news division. There’s a great younger cast — Emily Mortimer, Tom Sadoski, Alison Pill, John Gallagher Jr., Dev Patel–to mix things up with. Mortimer, in fact, is the yin to Daniels’ yang, and may wind up being the central nervous system of the show thanks to her role as producer of the fictional “NewsNight.”

Every episode of “The Newsroom” will revolve around stories that have recently been in the news, and how the “NewsNight” folks deal with them. Whether a liberal bias will creep into the storytelling is unknown yet from the pilot–we shall see. So far, everyone’s on equal footing, but I am told that in coming weeks the Tea Party becomes part of the story. And Jane Fonda joins the cast for two episodes as the conservative billionaire owner of the network.

But in the end “The Newsroom” is going to be like catnip for HBO subscribers. And it’s ready made for awards — Golden Globes, Emmys, all of it. Watching “Newsroom” take off will be a pleasure, and a relief to HBO, which has had had trouble launching dramas lately.

Last night’s audience will have been the harshest critics–people from CBS, ABC, and NBC, CNN, MSNBC were all there–from George Stephanopolous to Bryant Gumbel to Regis Philbin to Charlie Rose and even New York Times publisher Arthur Sulzberger, Jr. Quite the star studded group poured from the screening room into the Porter House restaurant in the Time Warner Center to congratulate Sorkin and his cast. And yes, they loved it.