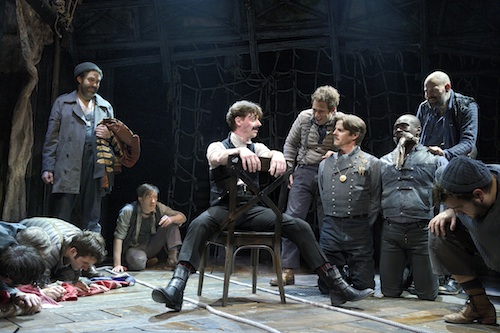 It does seem like Christian Borle, star of “Peter and the Starcatcher,” is leaving the kooky play soon after Sunday’s Tony Awards. A casting call has gone out for his character, “Black Stache,” the antagonist of everything that goes on in the play with music. (This has been a confusing year of plays with music and musicals with plays–or something like that.) Borle probably has to leave to get ready for second season taping of the NBC show, “Smash.” Even though “Smash” won’t return to the NBC lineup until after the beginning of next year, the episodes for season two begin filming in July.

The casting call sheet is looking for a new “Stache” immediately. The first performance is set for either July 2 or July 9.  Borle is nominated for a Tony Award as a featured actor (he’s been nominated before, for “Legally Blonde”).  This year he’s up against Michael Cumpsty, Andrew Garfield, Tom Edden, and Jeremy Shamos. He’s great in “Starcatcher,” but the show itself is only doing so -so at the box office. Without any Tony wins, “Starcatcher” — which started off Broadway– may be facing a closing notice by the end of the summer. (Try and see it–it’s a very clever show.)

A rep for “Starcatcher” says that they know Borle has to leave for “Smash”–they just want to be ready when he does.