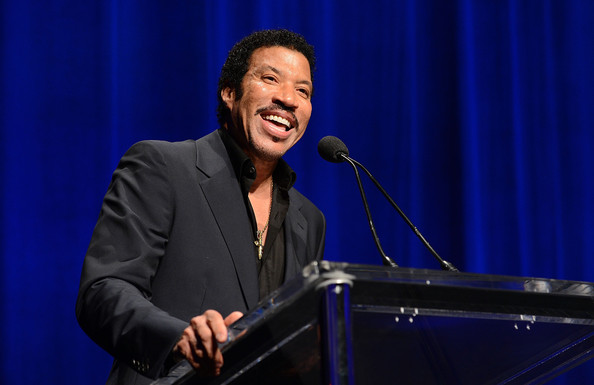 Lionel Richie got the legend treatment last night at the Apollo Theatre’s 7th annual gala. Richie, on top of the charts with his “Tuskegee” album, sat in a box above the stage and watched several performers sing his songs before accepted the Lifetime Achievement Award from Apollo board member Ronald Perelman (who couldn’t help but throw in a couple of F bombs).

It was a great night at the Apollo, with tributes kicking off the show–Valerie Simpson played “Ain’t Nothing Like the Real Thing” on the piano in memory of her husband, Nick Ashford. Simpson — now a solo performer–is a revelation as a singer. She should make another album. Gladys Knight did a ferocious medley of Etta James songs. And Chaka Khan kicked off the evening with “I’m Every Woman,” in honor of Whitney Houston. The O’Jays’ Eddie Levert paid tribute to Don Cornelius. And there were mentions of both Donna Summer and Hal Jackson.

It hasn’t been an easy year for soul music. But the Apollo event raised $1.2 million for a theater and cultural center that’s wound up being the heart and soul of Harlem. The Apollo gave its corporate award to Citigroup’s Vikram Pandit. There were also performances from Mary Mary and Donnie McClurkin. But it was Lionel who stole his own show. He took the stage at the end and performed two songs, “Three Times a Lady” and  “Easy (On A Sunday Morning).”