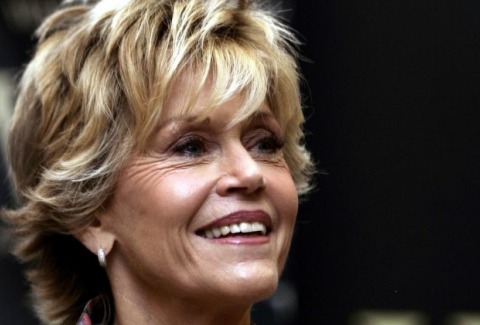 In “Peace Love”–which opens Friday–Jane plays a sexy, feisty grandmother who takes in her daughter (Keener) and her kids (Elizabeth Olsen and Nat Wolff). She also has a much younger boyfriend in Jeffrey Dean Morgan. It’s a funny set up, and Fonda will probably get a Golden Globe nominations and some other awards activity next fall if IFC Films mounts a campaign. She’s that good of course (she already has two Oscars, you know).

But this is also a Fonda Renaissance period. On June 24, she debuts in HBO’s “The Newsroom” created by Aaron Sorkin. In the preview clips, you can’t take your eyes off of her. Sorkin is said to be writing her an even bigger role for the second season. And Fonda is also starring in “Better Living Through Chemistry,” with an all star cast. And she narrates the movie. Of course, let’s not forget she’ll be playing Nancy Reagan in Lee Daniels’ “The Butler.”

And the apple doesn’t fall far from the tree, as they say: Jane’s son, Troy Garity, starts his second season of “Boss” on the Starz channel in August.

And yes, in case you were wondering, Fonda is happy, happy and in love with famed record producer Richard Perry, who’s writing his own memoir right now of Hollywood and rock and roll with Carly Simon, Ringo Starr, the Pointer Sisters, and friends like Warren Beatty and Jack Nicholson.

Meantime, don’t miss “Peace Love” when it opens this Friday. It’s for adults. No flying, or special effects. It’s NOT in 3D. But, like “The Best Exotic Marigold Hotel,” it’s human and fun. Just like a real movie