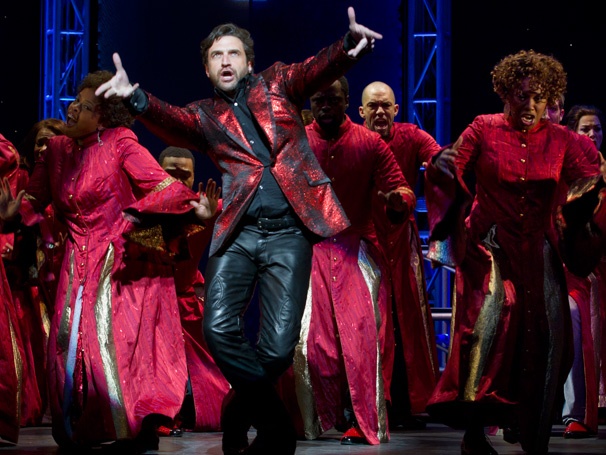 It’s over. The big race from March 1st — when the spring season begins– to April 26th, cut off date for eligibility for the Tony Awards. It ended tonight with a thud. I saw “Leap of Faith”–it’s as bad as the 1992 movie, maybe worse. I skipped “Don’t Dress for Dinner” and “Ghost: The Musical.” The other reviews were bad enough. I really liked “Nice Work If You Can Get It,” and thought the New York Times was unusually harsh and wrong. It’s delightful, and Matthew Broderick is very good in it. As for “Leap of Faith”: they brought in the talented Warren Leight (“Sideman”) to fix a broken script. He did everything he could. He used the paddles, yelled “Clear!” and tried to revive a dead body.

But the show is inert. The songs are mostly torture. The concept is still a very pale rip off of “The Music Man.” Boy, if you saw the most recent production of that show, with Craig Bierko, or watched the classic film with Robert Preston, you’d wonder why anyone would try to make this musical. Taylor Hackford left as director seemingly years ago. He could smell the turkey while it was basting. And while the performers are all fine, it doesn’t matter. “Leap of Faith” will close very, very quickly.

So that’s the bad news. The good news is that there plenty of selections in all categories for awards. The Outer Critics Circle got most of if right. On Friday morning will come the Drama Desk nominations, which are always weird. (They’re the theater equivalent of the National Board of Review.) There are some others, and then the Tony nominations the first week of May.

Now, some of this depends on what’s eligible for each group. Shows like “Venus in Fur,” “Peter and the Starcatcher,” and “Other Desert Cities” had off Broadway runs and were honored in some corners last year. “Once” has a score from a movie, so the score can’t get awards but the show can. “Newsies” has a mixed score of old and new. “Spider Man,” you know about it. I’d like to see Julie Taymor rewarded with a Best Director of an Original Musical nomination for daring to do what she did. And the show turned out to be a hit.

“Death of a Salesman” is the best play revival, and Philip Seymour Hoffman, Andrew Garfield and Mike Nichols are all on their way to awards. I’m crazy about everyone from “Once.” If Stockard Channing (“Desert”) and Nina Arianda (“Venus”) are allowed to be nominated, they should tie. The OCC remembered Tyne Daly from “Master Class,” in which she was superb. In musicals, Audra McDonald is stunning in “Porgy and Bess.” Among actors in musicals, there will be fierce competition among Norm Lewis, Steve Kazee, Jeremy Jordan, and Matthew Broderick. I hope Josh Young is cited for “Jesus Christ Superstar.”

“Leap of Faith” was not the worst show of the year. That honor goes to “Lysistrata Jones” perhaps tied with “On a Clear Day You Can See Forever.” They were each quite painful.

As the season ends, my hat is off to the intrepid Harry Haun of Playbill, who dutifully interviews all these people as if everything, life, depended on it. He is totally objective, just does it, whether the show or the performer is good or bad. He wants everything to succeed, unlike some other people, whose name doesn’t deserve to be reprinted.

Then there’s the other end of the Broadway world: the show crashers. These are weird, highly eccentric, sometimes dangerous looking types who hang around under the marquees on opening nights, begging for tickets. They can’t be photographed because they are like endangered species. When they see a camera, they run. There’s a small, elderly, well dressed woman with gray hair. There’s a very tall,  lanky older guy with a huge head of wavy gray hair. He always wears the same blackish suitish outfit. One of the crashers looks like the son of Professor Irwin Corey, with a big bald spot rimmed by wild, lunatic uncombed locks; he wears glasses. A chubby, middle aged woman, very friendly, always sports a cane. There’s another guy who always wears a knit cap with a cheap suit. There are others; they would make a great documentary. More often than not they get into whatever show or party they want. Interesting: I didn’t see any of them at “Leap of Faith.” Even they knew.