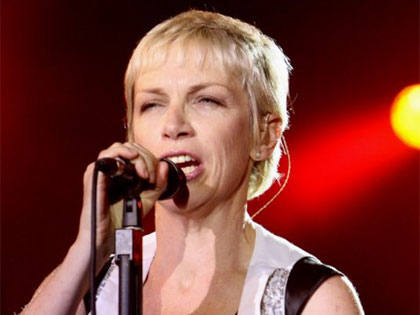 EXCLUSIVE: There are so many confabs with important people that I’ve lost track of them. There’s Davos, Clinton Global Initiative, TED, the United Nations, the big meeting in Sun Valley–these are the conventions where the top top people who are making our lives better (or worse, depending on your view) get together, share ideas, and get a nice dinner.

Next month outside of London, at the Grove Hotel, Google has their annual Zeitgest meetings. It’s two days of talks, music, golf, dinner and, apparently Annie Lennox. She’s the featured performer this year, and I wish I could be there to see world leaders and techie innovators wipe away tears during “Why.” The 2012 Zeitgeist is Brit oriented, so speaking on one panel are English musician Imogene Heap and red haired actress/model and very tall beauty Lily Cole.

The end of the two-day conference is supposed to be a conversation between Eric Schmidt and Bill Clinton (they have a lot in common, apparently). In between, there will be tons of VIPS. But in the press section, no Murdochs. James Murdoch spoke at Zeitgeist 2007, but things have, uh, changed. The press area will include reps from the Guardian, the Independent, and Al Jazeera. But no one from News Corp or its affiliates is scheduled. Shame about that. I’ve attached the schedule below.

A Google spokesman had this to say: “This is a leaked, early stage document that’s subject to change between now and the event itself. As such we can’t comment on the content, but we look forward to welcoming lots of great speakers to Zeitgeist in May.”

If you want to attend, the Grove Hotel is in Hertfordshire, set on 300 acres. Here’s the schedule: 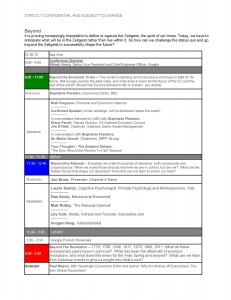 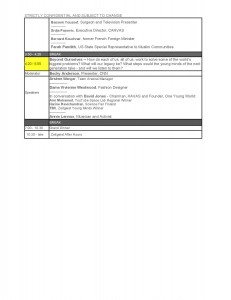 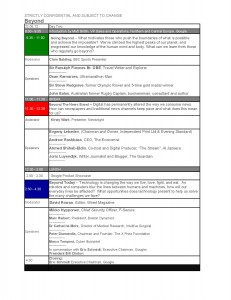