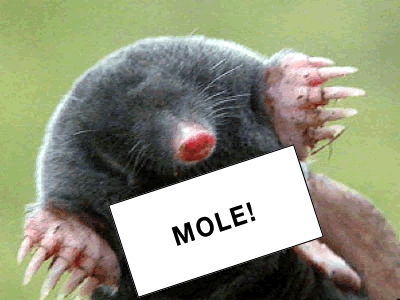 I do have to laugh at this story. After a year of phone hacking, pie throwing in Parliament, more hacking, dozens of arrests, the resignation of James Murdoch, you wouldn’t think there’d be much left to embarrass News Corp. And then Gawker.com, that sly purveyor of gossip and snark, announced they’d hired a current Fox employee to be their mole in the conservative network. The “Mole” has already started reports on Gawker.com. They’re not so earth-shaking yet, but they’re brazen. Now Fox News has released a statement saying they knew who he is and they’re considering their legal options. The Mole says they’re wrong, he’s still at work, and still undercover. If Fox had him, believe me, the Mole would be gone. They don’t know who this guy is, no one does, and it’s hilarious. Believe me, they will turn over the building looking for him. Years ago, when Judith Regan was having an affair with then police commish Bernie Kerik, Fox let the NYPD rip up the green room when Judy lost her wallet. They thought everyone including the make up ladies was a suspect. Everyone was questioned. Paranoia rules at Fox News. This should be quite an adventure. Good luck, Mole!

UPDATE: Hi. My name is Joe Muto. I was the Fox Mole. FROM WWW.GAWKER.COM

Two hours ago I was called into a meeting with Dianne Brandi, the Fox News Executive Vice President of Legal and Business Affairs and suspended indefinitely… with pay, oddly enough.

In the end, it was the digital trail that gave me away. They knew that someone, using my computer login, had accessed the sources for two videos that ended up on Gawker over the past few weeks. They couldn’t prove it entirely, but I was pretty much the only suspect.

I denied it, which is why they didn’t fire me outright. But two nice gentlemen from security escorted me to my desk to pack up my stuff, and it was pretty obvious at that point that I would not be setting foot back into 1211 Avenue of the Americas again.

So here I am. That’s me in the photo, sitting in the Gawker offices, with a portrait of a rather mischievous looking Roger Ailes behind me. He was my ultimate boss for the past 8 years.

I joined Fox News Channel in July 2004 as a production assistant. I bounced around for a few years working for some now defunct shows. (Remember “The Lineup with Kimberly Guilfoyle”? No?)

In January 2007, I joined the O’Reilly Factor as an associate producer, and there I have remained ever since. That’s me in this YouTube video pitching O’Reilly a story at the 4:00 mark.

I am a weasel, a traitor, a sell-out and every bad word you can throw at me… but as of today, I am free, and I am ready to tell my story, which I wasn’t able to fully do for the previous 36 hours.