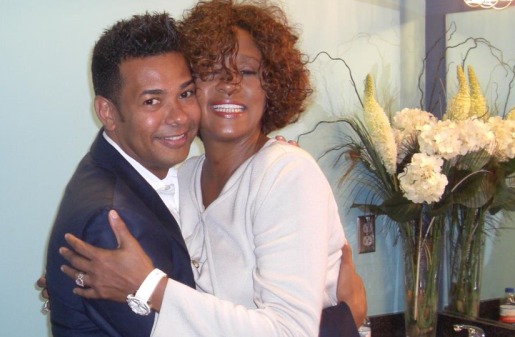 Here’s the one person in the Whitney Houston story whose name you have not heard, and who has remained a mystery: a Dutch man from Amsterdam who goes by the name of Raffles van Exel. He is also known – in court records—as Raffles Dawson and Raffles Benson. He was on the fourth floor of the Beverly Hilton Hotel in one of Houston’s suites when she died. He appeared downstairs in the lobby shortly thereafter, wearing aviator sunglasses, sobbing.

As usual, he had an entourage in tow, including Quinton Aaron, the actor who played the football player in “The Blind Side.” Raffles, in one of his many PR Newswire releases, recently announced that he’s producing movies with Aaron. It’s just one of many ventures he announces regularly. For someone who has no obvious means of support, he is a regular on PR Newswire and You Tube. On the latter, you can find him interviewing friends of Michael Jackson. It is assumed that he sells stories to tabloids. He regularly includes names of tabloid reporters like Kevin Frazier of “The Insider” on his Tweets.

Despite the shock of Whitney’s death, Raffles still made it downstairs to Clive Davis’s party. He was dressed in formal wear, had Whitney’s tickets in his hand, and intended  to sit at her table. Just inside the ballroom he was comforted by celebrities to whom he related his story—“I found Whitney.”  Gayle King hugged him. Quincy Jones listened patiently to his story. A security guard told me later, “Well, he was up there.” He was also hanging around with Houston all week prior to her death. On Tuesday when she emerged from a nightclub, looking disheveled, Raffles appears in a photograph on TMZ like a deer in headlights. He is standing right behind her in a powder blue suit. On Twitter, he wrote: “STOP reading the stupid blogs.. Whitney had a great time, she looked amazing. Nothing was wrong, it was just DAMN hot in that club.”

But who is Raffles van Exel? He’s one of Hollywood’s mysteries. I first met him in 2005 hanging around the Jackson family during Michael Jackson’s child molestation trial. After Michael went abroad, Raffles was often seen with Michael’s father, Joseph Jackson. He trades on being an “insider” when there’s a scandal. No one really knows him, but he’s always where there’s action and celebrities. On the internet he claims to own a number of companies including Raffles Entertainment. He’s also been sued a couple of times, once by a partner in something called Max Records, Inc., and once by a private aviation company in Los Angeles. I spoke to the plane company and they said they can’t comment because the situation is ongoing. On Twitter he claims to be managing “my girl,” Chaka Khan. There are plenty of pictures of Raffles on the internet with celebrities. You can see him with everyone from Magic Johnson to Sandra Bullock. If ever there was a real life Zelig, he is it.

It’s  not a surprise that Raffles has turned up in Whitney Houston’s story. Last October, he and Whitney and others traveled to North Carolina with Whitney’s sister in law Patricia Houston for something called a Teen Summit. It was billed as part of The Patricia Houston Foundation, an organization for which there is no official 501 c3  registration. Pat Houston, married to Whitney’s brother Gary, has been Whitney’s manager for years.  (Whitney’s own foundation for children ceased functioning years ago.) She also owns a consignment shop in North Carolina, and a candle company called Marion P. Candles, with Whitney.

In the old days he used to wear a yellow jacket full of black question marks—like The Riddler. On Saturday night, as he pulled in various guests to Clive Davis’s party past the velvet ropes, he was wearing a Michael Jackson-like tuxedo. He lives in West Hollywood now, but his official domicile—and where he’s been sued—is Chicago. He has not responded to countless emails and phone messages.

UPDATE: Raffles indeed attended the funeral, riding with Pat Houston in a family car. Insiders are docked and concerned that he’s still hanging around. At the funeral he made a beeline up the aisle at the church at the end of the service, to have his picture taken with Cissy Houston. Security rebuffed him. I’ve since learned also that his family may be Dutch, but he is from Suriname in South America. More to come, both here and at Forbes.com