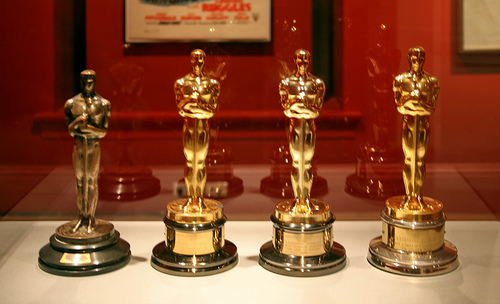 Best Picture nominees: The Artist, The Help, The Descendants, War Horse, Moneyball, Midnight in Paris, Tree of Life, Hugo, and the big surprise–Extremely Loud and Incredibly Close. Not nominated: The Girl with the Dragon Tattoo or Bridesmaids. Other big shocks–Albert Brooks was not nominated for “Drive,” which is s a shame in the Best Supporting Actor category. His spot went to Max von Sydow in “Extremely.” Another big shock — “Tintin” was not nominated for Best Animated Feature. This is actually shocking. Leonardo DiCaprio was not nominated for “J Edgar” in Best Actor–his spot went to Damien Bachir in “A Better Place.” The other actor nominees were George Clooney, Brad Pitt, Jean DuJardin, and Gary Oldman for “Tinker Tailor Soldier Spy.” The latter film did much better than anyone could have guessed. Best Director went to Michel Hazanavicius, Alexander Payne, Woody Allen, Terrence Malick, and Martin Scorsese. In the end their five films–The Artist, The Descendants, Midnight in Paris, Moneyball, and The Help–become the real contestants. No surprises in Best Actress with Meryl Streep, Viola Davis, Michelle Williams, Rooney Mara, and Glenn Close all expected. In Supporting Actress, the only shock was Melissa McCarthy for “Bridesmaids.” Otherwise, Berenice Bejo, Janet McTeer, Octavia Spencer, and Jessica Chastain.

In the end, it’s the movies with the most acting nominations that carry the day. The only exception in this case will be Meryl Streep, for “The Iron Lady.”

Nominees for the 84th Academy Awards

Actor in a Leading Role

Actor in a Supporting Role

Actress in a Leading Role

Actress in a Supporting Role