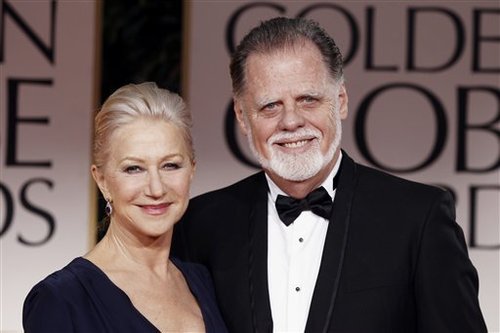 Still reeling from Sunday night’s parties all over the Beverly Hilton. HBO rocked, Fox Searchlight celebrated “The Descendants” (Rupert and Wendi Murdoch, I’m told, took two News Corp reporters with them on a golf cart from the hotel to their gala across campus– nobody walks in LA!) Sony toasted “Moneyball” and “The Ides of March.” But it was The Weinstein Company party that left everyone breathless–literally–since there was nary a cubic inch at one point.

Set up in a gigantic –massive–tent in the parking lot along Santa Monica Boulevard, the TWC edifice was imagined as an art deco nightclub complete with booths and a sunken living room. Almost the first people I saw upon entering were CBS chief Les Moonves and his multitasking journalist wife Julie Chen, ensconced in a front booth. I wondered why there weren’t further in, and then I saw: the crowd. Everyone from Meryl Streep and Michelle Williams–TWC’s Best Actress winners– to the whole “Artist” contingent including James Cromwell, plus the resurgent Penelope Ann Miller and Missi Pyle. Jane Fonda and Richard Perry soared in from the HBO party and made a beeline for Harvey Weinstein‘s table, where “The Punisher” was sitting with Chris Albrecht, head of the Starz Channel. There’s buzz that Jane may be appearing in a TWC film sometime soon–which means more awards! (She already has two Oscars.) Leonardo DiCaprio worked the room, an electronic cigarette firmly clamped between his lips.

I ran into Helen Mirren and Taylor Hackford, who’s finishing up a new film. So what’s Oscar winner Helen doing these days? “Darning sweaters,” she said. Seriously? “I’m very good at it,” she said and Taylor agreed. Sometime later, P Diddy in sunglasses twirled by with producer Swizz Beatz.The crowd was so thick that when Lindsay Lohan made her way in–sort of ethereal and spacey, a dyed platinum blonde–the photogs were climbing over the likes of Cameron Diaz, Jeremy Irons, and Morgan Freeman to snap Hollywood’s hottest walking calamity.

Madonna breezed through quickly, on her to the CAA party at Sunset Tower, and so missed the highs (Viola Davis) and the lows (Kim Karsdashian) not to mention the Hiltons, Bradley Cooper, and just people–studio people, fashion people, some media, and even a few famous crashers.