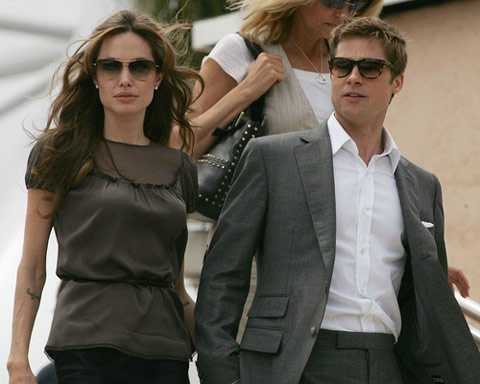 Brad Pitt was hilarious and touching last night accepting his Best Actor award from the New York Film Critics Circle. Joining other honorees Meryl Streep, Albert Brooks, Jessica Chastain and the folks from “The Artist,” Pitt was a little nervous and actually spoke softly from the podium at restaurant. Angelina Jolie was with him, looking more gorgeous than ever, accepting kudos for her underrated film “In the Land of Blood and Honey.” Viola Davis, herself a nominee for “The Help” from many different groups, presented Best Actress to Streep. Davis joked: “I popped a lot of Stress Tabs when we made ‘Doubt’.” Streep was philosophical, having won the same award two years ago: “We do this for love, and for as long as we can.”

Surprise presenters were Robert DeNiro –who had trouble with “Artist” director Michel Hazanavicius‘s name–and Francis Ford Coppola, who came for “Artist” producer Thomas Langmann. The Coppolas, it turns out, have been long time friends of the Langmann family. Famed late French film director Claude Berri (“Jean de Florette”) was Langmann’s father–his real name was Claude Berel Langmann. And Thomas told me something stunning: when Claude Berri won an Oscar in 1966 for a short film, “Le Poulet” but he didn’t have the money to go to Hollywood and claim it. The Academy mailed it to him instead! Sacre bleu!

Anyway, back to Brad Pitt, who’s on track to win the Oscar for his work in “Moneyball.” He said the award was a big deal considering “I’d never been on ap plane til I was 25.” He talked about coming to New York to audition for a soap opera in 1989. “I had to put myself up in an apartment on Christopher Street,” Brad recalled. “My first impression of the city was There are a lot of guys around here. But they’re so nice!” That got big laughs.

He continued: “On set the clock’s ricking, the camera’ rolling. A lot of what we do comes out of instinct and intuition. I am continually surprised about how much I learn about storytelling and filmmaking from your reviews. We are complex, we are industries to ourselves, we are difficult to each other…we live in continual flux, Christians and Muslims, Democrat and Republican, Denby and Rudin…” — a reference to a recent feud between producer Scott Rudin and film critic David Denby. Again more laughs.

He said: “It never crossed my mind that I’d be here.” And then, almost as an afterthought as he was leaving the stage, Pitt said: “I love films, I absolutely  love them. I consider it a great privilege,  I thank you for this, it means so much to me, and I’m glad this wasn’t televised.”