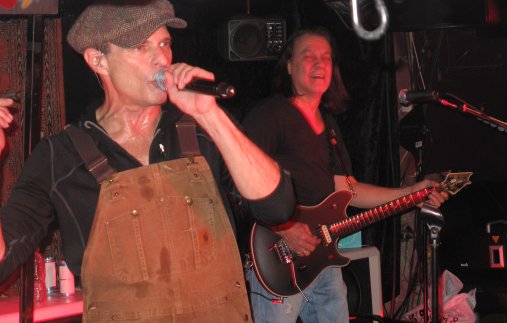 Jimmy Fallon, John McEnroe and Patty Smythe, and about 200 other lucky rock fans got a chance to see Van Halen, the 1980s rockers, perform for the first time in eons, last night. The place was Cafe Wha?, the famed tiny Greenwich Village club on MacDougal Street once owned by singer David Lee Roth’s uncle, Manny Roth. And so, 92 year old Manny Roth made the trip from his home in Ojai, California for the promotional show, with his daughter. David Lee Roth’s two sisters came as well, making the table where I managed to find a sliver of a seat the official Roth family table.

“I’m 92 and I’m still in the game,” Manny Roth yelled to the audience after his nephew introduced him. But the singer could not hear his uncle over the crowd. Roth said, “He’s 92 and he says he’s having the best time of his life.”

Manny Roth opened Cafe Wha? in 1960. It’s much the same as it was then: a narrow bunker under the Players’ Theater, with low ceilings and a marble floor Manny hand-laid 52 years ago. (He sold it a a while ago.) “David woke me up the other day and said Uncle Manny, I’m finally playing Cafe Wha?!” From the stage, nephew David admitted: “I carved my name on one of the bannisters down here when I was seven years old.”

Roth and another family, the Van Halens, took the stage after a bodyguard walked them in from the front door and parted the sea of old rockers who’d come to see them, pushing aside waitresses who carried trays above their heads. By the time Eddie, Alex and Wolfgang Van Halen and David Lee Roth took the small stage, and played the Kinks’ “You Really Got Me,” the temperature in the bunker had risen considerably. There wasn’t much available air for breathing either.

“Welcome to Occupy Van Halen,” announced Roth, who sported a tweedy newsboy cap. After the Kinks song, the group–which hasn’t played together with this lineup really ever–ran through mostly hits like “Hot for Teacher,” “Panama,” “Dance the Night Away,” “Running withe Devil,” and “Jump.” Bassist Michael Anthony has been replaced by Wolfgang, Eddie’s son with Valerie Bertinelli. Roth has not sung with Eddie and Alex in more than 20 years. There have been plenty of failed attempts to put Van Halen back together, all ending in acrimony. A 2007 tour ended in rehab and reproach. But time and finances will always produce detente in a classic rock band.

As I reported last week, Van Halen has recorrded a new album that will be released on February 7th. It’s called “A Different Kind of Truth.” Trhe first single is “Tattoo,” but they didn’t play it last night. Instead they played “She’s the Woman,” which will be on the album. An ardent fan said it’s an unreleased track circa 1978.

Roth, opening the show, spoke for the group. He talked about all the media in the room. “Which one of you guys from the press knows Lady Gaga. I gotta meet her.”Roth said he’d been living on the Lower East Side a few years ago in the building above the club where Lady Gaga got her start. Small world.

He also talked about being an EMS ambulance. “It was an eye into New York City that most people don’t have,” he said.