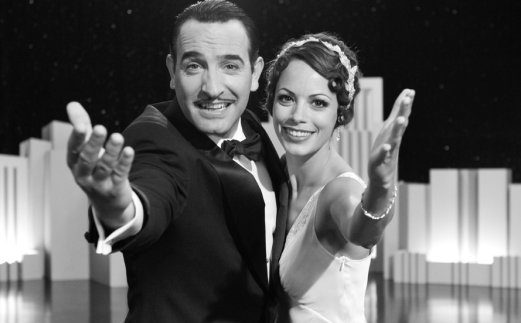 Isn’t it interesting that the top Oscar contenders–“The Artist” and “Midnight in Paris”–want what the other has? “The Artist” is made by French filmmakers who long for Hollywood’s yesteryear and made the film in Los Angeles. They don’t send it up. They love it, and breathe it. The movie is so flawless in its execution by Michel Hazanavicius that you fell all of them–the act0rs and the characters–have stepped into the world of silent film in Hollywood in the late 1920s.

And then there’s the Woody Allen film, made by Hollywood people in Paris. They long for Paris in the 20s so much that Owen Wilson‘s Gil simply slips back in time to Paris at roughly the time Jean DuJardin’s George Valentin is making his movie in Hollywood. Indeed, if Valentin had gone home to Paris during a break from filming his silent movies, he might have run into Gil, Hemingway, the Fitzgeralds, Picasso and his mistress Adrianna.

Of course, the kicker in “Midnight in Paris”–and why Woody Allen’s movie is so insightful–is that everyone yearns for a better time in the past. Gil wills himself into Paris of the 1920s. But Adrianna, who lives in the 1920s, only wants to be part of Paris’s Belle Epoque in the late 1890s. When she and Gil arrive there, Gaugin, Degas, and Toulouse Lautrec grumble about how unimaginative their era is to them. And then the best laugh of the season–and I hope one that is used as a clip for one of the awards shows–the modern day detective hired by Gil’s father in law to be, wandering by accident into the Louvre, disturbing Napoleon and Marie Antoinette and Louis the 16th having dinner. “Sorry, I took a wrong turn,” he says. It’s the best punch line of 2011.

A lot of the films of 2011 are about longing for the past. “Tree of Life” is about the 1950s in Texas (and the formation of the universe in mind numbing detail). “War Horse” is set in World War I. “Hugo” also comes from the earlier part of the 20th century. It’s probably a coincidence, but inadvertently it does say something about needing an escape from the present. How nice to see a bunch of films in which no one can flip open a cell phone, or discover the answer to a question by consulting a handheld device. The Academy responds to these films just as much as the audience. I think last year it had a lot to do with “The King’s Speech” being so warmly received, while “The Social Network” failed to resonate with Oscar voters. There’s something to be said for embracing a moment in time.