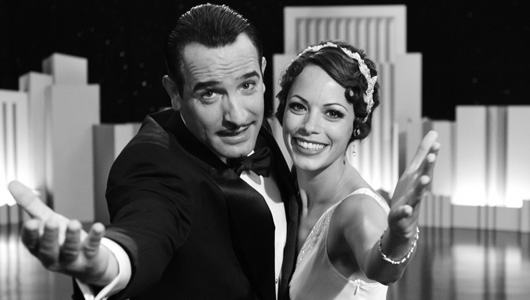 Things are shaping up just as I thought they would: more kudos and awards for “The Artist” this weekend. The silent black and white film added awards from the Boston Film Critics and the New York Film Critics Online. Director Michel Hazanavicius also added Best Director nods from those groups. The San Francisco Film Critics went for Terrence Malick’s “Tree of Life,” however, because, well, they’re in San Francisco and everyone’s a little woozy out there. The American Film Institute picked its 10 best films but gave “The Artist” a special award because it’s not American made (although it was made in America and about America). They also gave a foreign award to the “Harry Potter” series, which makes sense.

The Los Angeles Film Critics gave “The Descendants”  Best film, and Malick best director. That group, which is not very press friendly, now guarantees a pretty weird and empty red carpet since Malick won’t show. Neither will legend Doris Day, who’s not coming to pick up her Lifetime Achievement Award. (She doesn’t fly and doesn’t like to leave her home in Carmel, California.) They also chose a best actress no one’s ever heard of instead of giving something to Meryl Streep, Michele Williams, Viola Davis, Glenn Close or Lizzie Olsen, Tilda Swinton, or Rooney Mara. They’re so avant garde!

Remember, “The Artist” also has the prestigious New York Film Critics Circle award, too. And they have acting nods to Brad Pitt, Meryl Streep, Jessica Chastain, and Albert Brooks. I do wish someone would give Berenice Beho a supporting actress nod for “The Artist,” though I do think she’ll wind up with an Oscar nomination.

PS No awards support so far, not even from AFI, for Stephen Daldry’s “Extremely Loud and Incredibly Close.” And almost nothing for the David Fincher remake of “The Girl with the Dragon Tattoo.” Only last year Fincher won every city with “The Social Network.”

Special Awards to “The Artist” and “Harry Potter” series

Bridesmaids
The  Descendants
The Girl With the Dragon Tattoo
The Help
Hugo
J. Edgar
Midnight in Paris
Moneyball
The Tree of Life
War Horse

Runner-Up: “The Arbor” by Clio Barnard.

Best supporting actress: Jessica Chastain, who was recognized for her work in six films — “Coriolanus,” “The Debt,” “The Help,” “Take Shelter,” “Texas Killing Fields” and “The Tree of Life.”

Best Independent, Experimental: “Spark of Being.” Directed by Bill Morrison, it’s a re-imagining of Mary Shelley’s “Frankenstein,: using images culled from archives around the world.

Best Picture
“The Tree of Life”

Best Director
Terrence Malick for “The Tree of Life”

Best Actress
Tilda Swinton for “We Need to Talk About Kevin”

Best Cinematography
Emmanuel Lubezki for “The Tree of Life”

Marlon Riggs Award for courage & vision in the Bay Area film community
National Film Preservation Foundation, in recognition of for its work in the preservation and dissemination of endangered, culturally significant films