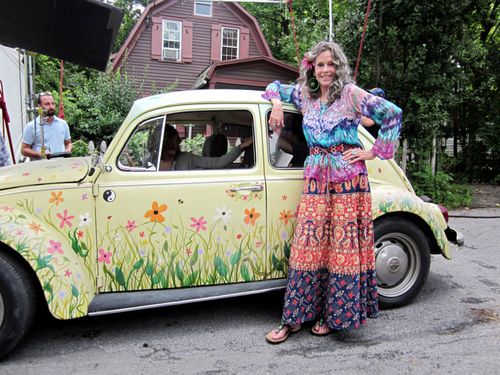 Good news. Bruce Beresford‘s “Peace, Love and Misunderstanding,” which premiered at the Toronto Film Festival, has been picked up by IFC Films. The charming comedy about a hippie grandma in Woodstock, New York who takes in her divorcing straight laced daughter (Catherine Keener) and kids got terrific reviews when it played in September. I’m told IFC is releasing it in late April 2012 and may even try a Mother’s Day tie in. Adding to the movie’s value is that Keener’s daughter in the film is played by Elizabeth Olsen, so hot right now with “Martha Marcy May Marlene.”The film also stars Chace Crawford from “Gossip Girl” and Jeffrey Dean Morgan.

The word is that IFC — hot right now with Werner Herzog’s “Cave of Forgotten Dreams” and the documentary “Buck”– may also be circling a French film starring Fonda, called “And If We All Lived Together?” Fonda, who turns 74 this month, is hot as a pistol right now with a bestselling book about aging–“Prime Time”–and new workout DVDs for those of us who might otherwise collapse doing younger routines. Last week, she hosted a panel discussion at the TED conference with Gloria Steinem and Dr. Mehmet Oz, and also presented CBS’s Lara Logan with an award at the Women’s Media Center awards. Fonda and boyfriend Richard Perry–famed record producer of Rod Stewart, Carly Simon, etc–just blew through New York with dinner at Elio’s and Crown restaurants, and took in Hugh Jackman’s show on Broadway, and the play “Other Desert Cities.”

PS Here’s an idea for HBO: Why not make “Peace Love” into a series? It’s rife with possibilities for opening up.