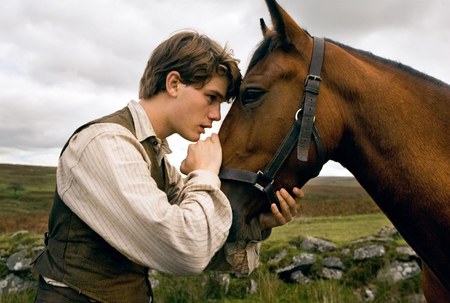 Steven Spielberg’s “War Horse”is a dazzling movie. Surprise! For those, like me, who worried that it would turn out to be “Lassie” with a horse, we were wrong. For those who thought the lack of the amazing puppets from the stage show would make the story less powerful, we were wrong. “War Horse” works on film. Yes. it’s schmaltzy. John Williams‘s score, while beautiful, is perhaps used a tad too much and is busy. But Spielberg’s “War Horse” is a beauty, a thoroughbred of a film, a stallion, and wins, places, and shows. (Enough cliches?) The highly astute and masterful director has managed to remake “War Horse” so that the film stands on its own from the highly acclaimed stage show playing in New York and London to sold out audiences. That alone is quite remarkable. Because he doesn’t have the puppets he must redirect the whole pitch of the enterprise to the actors, the mood, and texture of the story.

“War Horse” was shown in nine cities this afternoon including New York, with a Q&A following with the director. People followed the Q&A on the internet and were able to ask questions of Spielberg after the show. He held forth for almost an hour, explaining a lot for a film that is truly a big meal. Spielberg–with so many classics under his belt–has made what he readily acknowledges is an “old fashioned” movie. “War Horse” only has 3 computer generated segments. It was shot with wide lenses. And while Spielberg says there are no intentional homages to elder directors and famous films, you can find echoes of John Ford, David Lean and “Gone with the Wind” woven into the new film’s fabric.

The foundation for the film’s greatness certainly comes with the cast. Newcomer Jeremy Irvine is a star in the making as Albert, the English farmboy who trains Joey, the unmanageable thoroughbred. Emily Watson is simply outstanding as his mother. “It’s the best work she’s ever done,” Spielberg told me yesterday after the Q&A, and he’s quite right. (And that’s saying a lot.) Niels Arestrup, Tom Hiddleston, Eddie Marsan, David Thewlis, David Kross (from “The Reader”) and Benedict Cumberbatch are just a few of the extremely skilled British actors that smart filmgoers will recognize. They are each sensational. Peter Mullan, less well known to American audiences, is spot on as Albert’s troubled father.

“War Horse” presents a Spielbergian hybrid in a way. The grit and glory of “Saving Private Ryan” — a tough war movie–is literally wrapped in the gauze of his more fanciful war films like “Empire of the Sun,” “1941” and “Always.” I don’t want to diminish the achievement of “Schindler’s List,” but there’s a scene in “War Horse” that recalls it–the horror of war after a brutal battle. The war scenes in “War Horse” are almost unexpected after the buttery glow of young Albert training Joey and their lives in a pre-WWI country village. A pesky, honky goose makes the whole atmosphere feel like a musical could start at any moment.

But then Spielberg gets serious. As Joey the horse is conscripted into the war, his life becomes episodic. And little by little, as Spielberg follows author Michael Morpurgo’s now nearly 30 year tale,  the director starts showing us his real stuff. The war–with no blood and nothing to flinch from in the scenes–becomes almost cosmic. The double climax comes first when one soldier disappears in a cloud of grenade gas. This is followed by Joey’s entanglement in barbed wire–an incident that literally stops the war between the British and the Germans cold. Look for Oscar host Billy Crystal to attempt a dance number with huge wire cutters next winter, that’s all I’m sayin.’

“War Horse” will be released on Christmas Day, a whole month from now. It’s not Spielberg’s only film of the season. He also the animated “Adventures of Tin Tin,” which is quite charming. But “War Horse” ia a big deal, a spectacle, a hailing back to when movies really took your breath away. It’s a very nice Christmas present, and kind of a relief. It’s certainly one of the half dozen or so best films of 2011 (along with “The Artist,” “Midnight in Paris,” “The Descendants,” “Moneyball,” and “Hugo”). But it also may be well beyond that.

My only fear now: Joey, Uggie the dog from “The Artist” and one of the animals from “We Bought a Zoo” will want special seats at the Golden Globes and their own category.