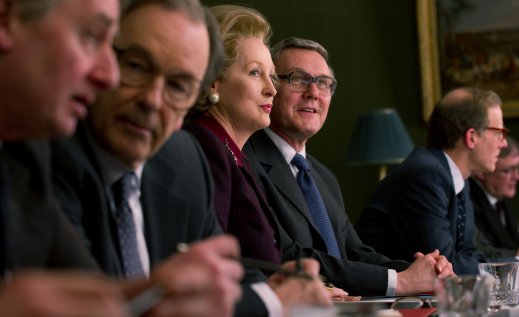 Meryl Streep hasn’t won an Oscar since 1982, but with “The Iron Lady,” her portrayal of former British prime minister Margaret Thatcher may bring her a new gold statue. The film, directed by Phylidia Lloyd, has already caused much controversy in Britain. But here in the US I suspect it will be less polarizing. Wtihout the baggage of having lived under Thatcher’s rule, we can appreciate the filmmaking here and the performances–not just by Streep but by Jim Broadbent as Dennis Thatcher, too. “Iron Lady” is, I think, a pretty sympathetic look at Thatcher.

As prime minister she’s depicted as strong and bright. She is certainly not mocked in any way. This is not a satire. What may throw the UK audience is the depiction of Thatcher’s dementia. There is broad poetic license taken as she talks to her dead husband, and the filmmakers try to imagine what’s going on her head as senior citizen battling a debilitating illness. It’s structural device for the film but I had no problem with it. In fact it softens the Iron Lady in that the film becomes quite the poignant love story between Margaret and Dennis.

Again, most of the talk in the British press came this week from people who have not seen the film. Once they do, I think they’ll be impressed. And while Thatcher’s politics might not be mine (or yours) there’s no questioning her reserve, her intelligence or perseverance by Streep’s magnificent work. There are a couple of scenes when she and Dennis are in their own mortal danger– they survive at least two terrorist attacks–and they come through with great dignity and courage.

As for Meryl Streep, she’s like the smartest kid in the class. She’s never going to be overtaken by any one. She’s almost too good. Whether she’s playing Thatcher as PM or as an elder, Streep cannot help but bring real nobility to the role. She not only inhabits Thatcher but creates her as a new dramatic device. That may be hard for Thatcher’s real life children, but objectively, it’s a superb job. You really marvel at Meryl Streep, that she continues to work this magic.

This is the first time I can think of in forever that Streep is totally carrying a film. More recent efforts — “Doubt,” “The Devil Wears Prada,” and so on–were ensemble pieces in which she was featured. This is a full on star turn, and it’s total success. Go see this film just to see an actress at the top of her craft. An Oscar might not be enough of a reward.