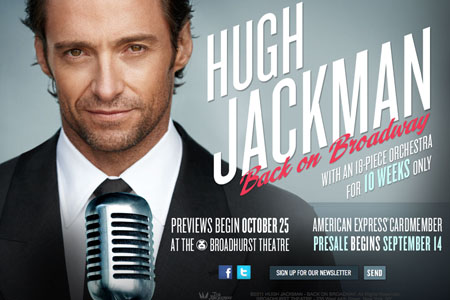 Movie star Hugh Jackman’s solo musical show took in $1.2 million in its first week on Broadway. It finished 5th for the week, behind big deal musicals “Wicked,” “The Lion King,” “Book of Mormon,” and “Spider Man: Turn off the Dark.” This is a pretty cool accomplishment considering that Jackman is one guy versus these huge casts. And his show doesn’t actually open until next Thursday, November 10th. Jackman is a rare contradiction in show business–a combination song and dance man, and action star. A Singing Wolverine! Well, good for him, he’s a lovely guy. Now, if only his producers will let in critics from the Outer Critics, Drama Desk, and then maybe Hugh will get some nice special awards next spring!