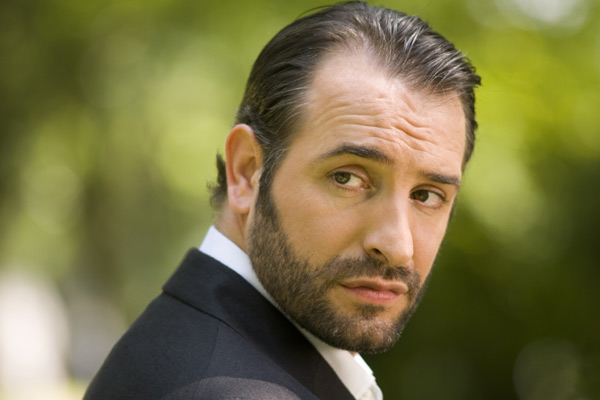 Jean DuJardin–you’ve never heard of him, but he will be nominated for an Oscar in “The Artist,” which played the New York Film Festival Friday night. “The Artist” was a hit in Cannes, and wins over anyone who sees it for its freshness, cleverness, and exuberance. It’s a black and white, silent film with three American actors–John Goodman, James Cromwell, and Penelope Ann Miller. But its real stars are French–Jean DuJardin, a French leading man who is 39; and beautiful Berenice Bejo, who is also the wife of director Michel Hazanavicus. Start learning these names, because they are going to figure in our lives pretty quickly. “The Artist” is a tour de force. It will be the must-see film of the season simply because no one’s ever seen anything like it before.

Only Goodman was absent last night at the film festival screening. And in the audience there was everyone from Jessica Lange to Barry Levinson, Eddie Redmayne, Benjamin Walker, Joel Grey, producer Michael Shamberg, and Julian Schnabel. Famed actor Charles Keating came to support Cromwell; they’ve been friends since the age of 20 when they worked at the Cleveland Playhouse. Many of the stars repaired to a private dinner at the swanky Fifth Avenue home of Susan and John Gutfreund, who served very American (and delicious) macaroni and cheese, and red velvet cake.

DuJardin is about to hit big, so he’s studying his English. He knows less English than Roberto Benigni did in 1998, but he’s learning fast. His wife, the famed French actress Alexandra Lamy, was with him too — it was her birthday. These two French couples looked they’ve stepped out of Vogue. They are certain to win over American film audiences quickly.

And even though Lamy was within earshot, I did ask Jean which actresses he’d like to work with in America. His answer? He looked around, and the said in a low French growl, “It’s a supermarket, no?” His English is getting better.

“The Artist” opens on November 23rd, and I predict it will cause a sensation. Set in 1927 Hollywood, the film unfolds at the end of the silent movie era. DuJardin’s George Valentin is the biggest star of the era, but he’s afraid talkies will kill his career. Enter Peppy Miller (Bejo, a potential Best Supporting Actress nominee), the first star of the new era. They are star-crossed stars who travel am ebullient but sometimes tricky journey. The movie was shot in Art Deco locales in Los Angeles. And it features cameos by a lot of well known character actors including Missi Pyle, Joel Murray, Beth Grant, and Malcolm McDowell. There’s also a stunning score that is sure to win many awards–it’s almost like a character in the movie.

Here are DuJardin and Lamy from their French hit TV show: http://www.youtube.com/watch?v=BJdqBFT-G1I&feature=related