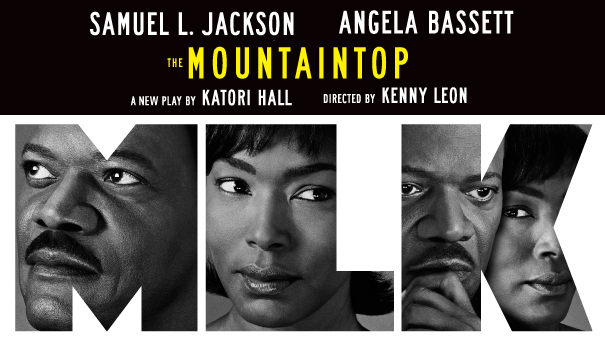 What a night on Broadway: “The Mountaintop” opened, with incendiary performances from Samuel L. Jackson respectively as Dr. Martin Luther King, Jr. and Angela Bassett as a maid (or it seems) in Memphis’s Lorraine Motel on the eve of Dr. King’s assassination. It’s been 20 years since Jackson was on Broadway (“The Piano Lesson”), 23 for Bassett (“Joe Turner’s Come and Gone”).

The audience was filled with big names, more than I’ve seen turn out at once for a Broadway play opening.

Lead producer Jean Doumanian should be proud bringing “The Mountaintop” to Broadway–it’s a terrific new play by a young black playwright named Katori Hall. Broadway is desperate for new blood; this is it. And Hall’s play, while not perfect, is certainly strong with a great plot twist and a knock out ending directed by Kenny Leon.

Bassett’s character is totally invented from fiction, and so she has greater latitude something original and wild. She is amazing, and must be seen. Jackson has the harder task–he’s playing one of the great icons of history, politics, and culture. Long a film favorite, Jackson pulls off his first stage work in years aplomb. He also has MLK’s hairline. “Look,” he showed me at the after party, “It’s a wig. I am bald under here.” He lifted his signature Kangol cap. Might he have played MLK with a Kangol? “I thought about it,” he said with a laugh.