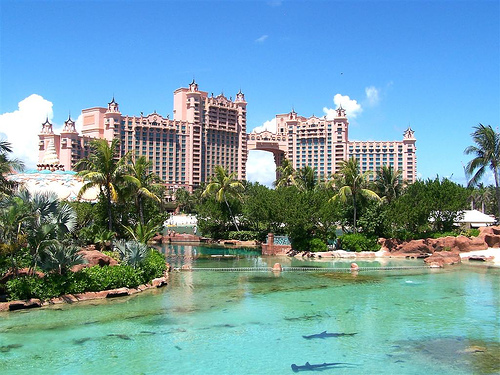 There’s a lot of trouble in the world of high flying international hotelier and casino owner Sol Kerzner, head of Kerzner International Resorts. The 76 year old South African zillionaire owns the Atlantis resorts in the Bahamas and Dubai, as well as the celebrity populated One and Only Resorts in Dubai, Mexico, and Cape Town.  And Kerzner himself may now be in a lot of trouble on several fronts. There’s talk that he may lose his seat on the company’s board within the next 90 days. At the same time, Kerzner is in the middle of what’s come a terrible divorce from his fourth wife. And he’s still mourning the loss of his son and heir apparent.

The saga of Heather and Sol has played out in the British newspapers but has so far remained off limits here. The divorce, sources say, has taken a toll on Kerzner, who’s always been a hard partying guy with no aversion to alcohol. Kerzner had been married to the former Heather Murphy for ten years and from all reports it was a love match. Heather, now 41, was devoted to Kerzner by all accounts. But word from inside the Kerzner empire is that the story is shaping up like a version of “King Lear,” with daughter Andrea, 48, reportedly telling her father that if he didn’t divorce Heather he would never see his grandchildren again. That’s the same Andrea Kerzner who purchased a $18 million Manhattan condo on Central Park West in 2008, according to The New York Observer.

Last year Kerzner put on a quite show for his 75th birthday, inviting friends from around the world to fly to Rome and sail around the Mediterranean  with him on his massive yacht. It was on the yacht, friends say, that Kerzner’s adult children forced a stand down with their father over Heather, who has two children from a previous marriage. The result was a massive, screaming, door slamming fight that guests like Quincy Jones, Naomi Campbell and Denise Rich are still talking about. When it was over, Heather was out. Now Kerzner– whose properties benefited in the last ten years from incredible publicity thanks to gala celebrity events and inclusion in movies and other media–could lose control of not just his personal life but his business, too.

It’s the business that’s proven to be more in peril than the marriage. Four years ago, Kerzner’s son, Butch, was killed in a helicopter crash in the Dominican Republic. Butch’s death, friends say, has thrown the father into a tailspin. Kerzner’s company is now said to be in disarray, with many talented executives, including the company’s head of corporate communications, leaving or being fired in the last couple of years. Meantime the company is struggling under $2.6 billion worth of debt that’s currently being restructured.

An expected fight among board members should be bloody, sources say. Kerzner and his two daughters occupy three seats. But the other directors–Ron Baron of Baron Capital, David Solomon of Goldman Sachs, and Tom Barrack of Colony Capital (yes, the same company that owns Neverland)– apparently feel it’s time for a change. Kerzner would lose his board seat and status but remain in some emeritus capacity.