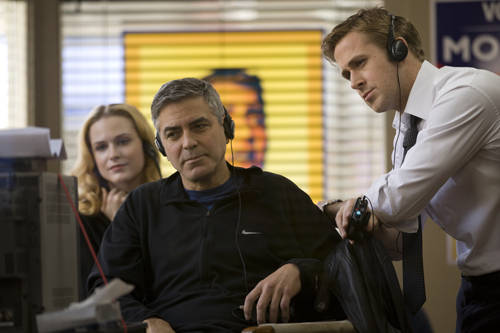 It was like the old days last night in New York: a big, fancy premiere at the Ziegfeld for George Clooney’s “Ides of March,” followed by a swanky, packed to the gills soiree at the ever so posh Metropolitan Club on Fifth Avenue. I can’t remember a Sony/Columbia release that featured Sir Howard Stringer making humorous introductory remarks, but maybe that’s because they know they have a winner in “Ides.” Clooney, Marisa Tomei, Evan Rachel Wood (whose guest for the evening was my new favorite music guy, K’Naan), Jeffrey Wright and the amazing Philip Seymour Hoffman and Paul Giamatti were all there from the movie. Only Ryan Gosling — the movie’s lead and probable Best Actor nominee — was missing because, of course, he’s shooting a movie.

The “Ides” premiere was also like an “ER” reunion with Clooney bringing both Eriq LaSalle and Michael Michele to the event. The Metropolitan Club was so crowded they promised they’d help if someone keeled over.

Then, of course, Clooney’s parents were there, meeting old friend Dan Rather, who waxed on about how much he loved the ’70s style film about a young political image maker (Gosling), his maybe not so upright candidate (Clooney) and the two campaign managers who bat him around like two cats with a toy (Giamatti, Hoffman). Tom Brokaw was also front and center, agreeing about the how well the movie captured the feel of a political campaign.

“Ides of March” is a must see film this weekend, even with Yom Kippur, the Yankees, and warm weather as diversions. Clooney and producer-writer Grant Heslov and the original playwright, Beau Willimon (when it was called “Farragut North”) have made a thrilling and compelling (and sexy) drama with lots of twists and turns. The writing is top notch, the directing is four star, and the acting does not get any better. Giamatti and PHS in a film together is like having Martin Balsam and Jason Robards from the golden days of theater. They are dynamite as each uses and betrays Gosling’s cocky but gullible Steve.

Cool night, cool movie– one of the best of any year.